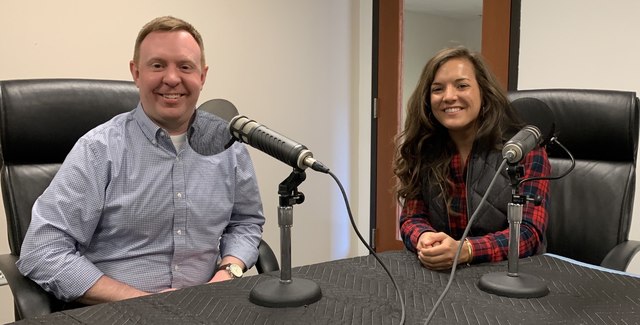 All In Podcast: Seeking To Understand Loved Ones Experiencing Faith-Related Doubts

Patrick Mason is the author and publisher of Planted, a book that offers helpful insights for members of the Church who are struggling with their faith. He shares his knowledge to Latter-day Saints abroad at firesides and through media outlets like The New York Times, Washington Post and ABC News. In this week's episode, All In host Morgan Jones talks with Mason about what to do when we, or those we know, have doubts or questions about the Church.

Morgan Jones: There's a statement that you make in the book that I love. You said, "The call to believe is not a decree to deny our doubts. It is rather to give place for a portion of God's light, whatever portion we have received in whatever form, to be planted and then grow within us." I love this idea of going back, when we start to feel like there's confusion or whatever, going back to what we do know, there's the quote where it talks about, "Hang on to the ground that you do have." So how do we hang on to that, while we're working through our doubts?

Patrick Mason: Yeah, I think this is one of the biggest struggles for people because there is a tendency when we begin to have questions, when we begin to have doubts, that it becomes all-consuming for us. And I think it's in many ways a natural thing that you sort of learned something new that the reshapes or caused you to question what you've known and so you sort of dive deep into that. I think it's a very natural human tendency. But I think what God calls us to do, is not to forget the experiences we've had. This is one of the common refrains in scripture, especially in the Book of Mormon, to remember. Life can be so overwhelming that it can be easy to forget what He's done in our lives, the experiences we've had, the moments when the Spirit touched our lives. Now maybe we have to rethink those things and put them in a new context and a new framework. Maybe the way that the Spirit touched us when I was a missionary, maybe I understood it one way then, and maybe I need to understand it a different way now. That's okay. That's fine. But we can't forget those things, and we can't forget the many mercies that God has shown us over the years. So I think that's what the call to faith is. It's an intentional remembering of what God has done. It's not setting aside all the things, or saying, "I refuse to ask any questions or to harbor any doubts or any of those kinds of things." Just put my fingers in my ears and go "la, la, la, la, la." That's not what the call to faith is. I think the call to faith is to remember what God has done and continue to cultivate and nurture that little seed. It's easy for that seed to die, and so even while we're doing other things, even while we're asking questions and doing other things, we have to do something to tend to that little seed. It's too precious to give up on.

MJ: Yeah. Another thing that I love in the book, you talk about how faith crisis is not a necessary or universal step on the path to spiritual understanding, but then you say, "This brand of unquestioning faith is unusual. For most people, faith is work, and oftentimes it is hard work. It is a journey with its peaks and valleys," and then you compare faith, specifically faith in the Church of Jesus Christ of Latter-day Saints, to love. And I thought that was like such a beautiful way of framing it, and I wondered if you could kind of share that thought with listeners?

PM: Yeah, so just to reiterate, I don't think everybody has to have a faith crisis. That's not one of the requirements to get to heaven. So there will be people, maybe many people, in the church who never go through a serious valley of doubt. Of course, they'll have their questions, or things won't make sense, but it won't lead to an existential crisis. And that's just fine. That's, that's totally fine. I don't think they should Lord that over people, it's like, "Well, I haven't had a faith crisis. Why do you? Just go over it." That's not charity. That's not empathy. But it is true that many people won't. And so I think the biggest challenge, and when I've gone around and talk to people, especially, for instance, maybe parents who never went through this, and then all of a sudden they're seeing their child or children go through this, I think the biggest challenge they have is just understanding where that child is coming from and what they're experiencing. And I think oftentimes in the church, we rush to identify questions with sin. It's like, "Oh, you're having questions about the church. So what are you doing that's wrong?" And then our minds immediately go to that, and sometimes that's true. Sometimes the patterns of our lives maybe lead to a decrease in faith. That's certainly true, but oftentimes, it's not. And so when I talk about it being a matter of love, it's that love is the forefront in that relationship. It's that we are called to love, far before we're called to judge. And in our baptismal covenant, that I love it as it's expressed in the book of Mosiah, that we "mourn with those who mourn," we "comfort those who stand in need of comfort," and then we testify of Jesus. I don't know if it's meant in an order of priority, in the way that it's written, in Mosiah 18, but that's the way it reads. The first part of our covenant is to mourn and to comfort with those who are in deep grief, whatever that is, whether they have cancer or whether they're going through a faith crisis. And then it says, then we testify of Jesus at all times, in all things and in all places. There will always be a time for testimony. People who've been around us know where we stand, but I think sometimes they question, "Do they really still love us? Do they still love me even when I'm going through a very difficult time?"