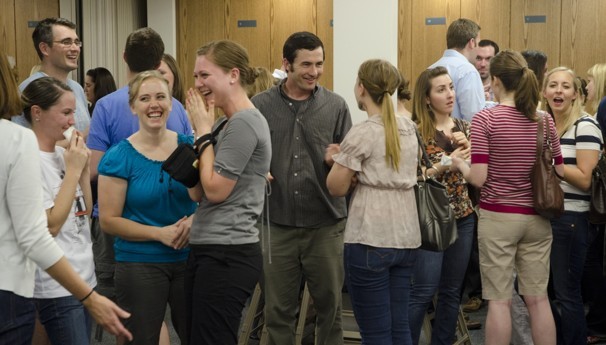 All the single Mormons: D.C. is 'Little Provo,' but with more pressure to marry

It’s Tuesday night Bible study, which at this Crystal City Mormon chapel looks a bit like a mixer. Pews are filled with people in jeans and flip-flops, many texting. The night begins with a prayer before segueing quickly into an ice-breaker trivia game and a pizza social.

Not surprising for a church made up exclusively of singles — 800 of them.

The newly opened “23rd Street chapel” is unique in the American Mormon church: It is the only worship space in the country devoted solely to unmarried people in their 20s, 30s and 40s. It serves the biggest population of single Mormons outside Utah in a neighborhood so thick with church members that it is nicknamed “Little Provo.”

The chapel represents Mormonism’s exalted view of marriage and its particular strategy for getting singles wed as quickly as possible: by separating them from people who are married.