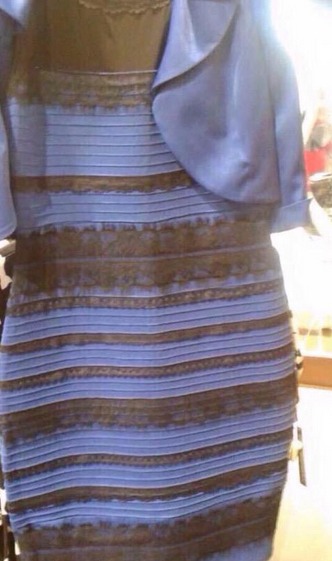 An LDS Perspective on the Viral Blue-Black, White-Gold Dress Question

Have you seen this picture floating around the internet recently?

Yesterday, the image popped up all over social media with the question: white and gold, or blue and black? (Which colors do you see?)

The science behind the different interpretations of the image is pretty intense, but after a fruitless conversation with my husband about what the color of the dress actually is (he sees black and I see gold), I started to see something different—a lesson in sympathy and perspective.

“Differences enrich our common existence,” a Mormon Newsroom commentary on differences and dignity shares. “Since no particular group has a monopoly on all that is wise, beautiful and just, everyone can learn from everyone else. Our experiences have gaps that need to be bridged, and our perspectives have blind spots that need to be filled.”

Or in this specific case, our perspectives can be partial because of the colors that we just can’t see.

In a 2013 conference address, President Uchtdorf remarks that trying to make everyone from a single mold “would contradict the genius of God, who created every man different from his brother, every son different from his father. Even identical twins are not identical in their personalities and spiritual identities.” He adds that though “we are united in our testimony of the restored gospel and our commitment to keep God’s commandments. . . we are diverse in our cultural, social, and political preferences.”

And maybe we’re even diverse in how we literally see something.

To my eyes, the color of the dress will never change. And the same can be said of my husband’s interpretation of the very same image. But understanding that there’s another perfectly acceptable way of viewing the same picture (or even the same gospel principle) is paramount to understanding one another and to finding acceptance in a world that’s quick to judge. Because different does not mean wrong; it just means different.

So back to our viral image, which is it? White and gold or blue and black?

Both. It all depends on your experiences, your mindset, and possibly your computer’s screen resolution. Isn’t that mind-boggling? But also… great?