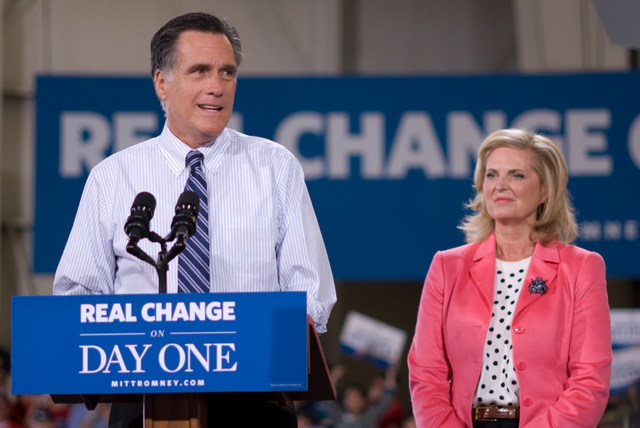 Ann Romney Shares Her Battle with MS During 2002 Winter Olympics

In 1998, at age 39, Ann Romney was diagnosed with Multiple Sclerosis. She had had been feeling symptoms for months, and her once active lifestyle was put on hold as she struggled to adapt to the new conditions her disease presented. She tried many different methods of medication, both pharmaceutical and holistic. Through trial and error, she figured out which methods worked best for her and was able to regain a degree of the strength she previously enjoyed. Although she still suffers from effects of the disease today, she has let her faith in God dictate the trajectory of her life. Read below an excerpt from her new book In This Together: My Story about her personal experience struggling with MS during the 2002 Winter Olympics:

“As the opening of the Winter Olympics got closer I was able to measure my progress in other ways. One of them was a gift to me from Mitt. When we’d arrived in Salt Lake, I hadn’t been able to walk all the way up the hill on Main Street. Now I was able to walk up and even down again if I had to. Mitt, meanwhile, had fought the countless battles necessary for Salt Lake to host the Winter Olympics successfully. He had worked more than full-time for almost two years. Once, we went thirteen consecutive days without really seeing each other, even though we were sharing the same bed: Because of my lack of stamina, I already would be asleep when he got home at the end of the day, and I would still be asleep the following morning when he left to get back to the office. His efforts had more than paid off: the funds had been raised, the venues were completed on time, the infrastructure was in place, the volunteers were assigned, event tickets were sold, there was a large surplus in the bank, and there was even snow on the mountains. Mitt was so deeply involved in every aspect of the Games that when there was a tremendous traffic backup on the first day of skiing, he got into the middle of the street and began directing traffic around the bottleneck.

Part of the planning included preparations for the Winter Olympics Torch Relay, a tradition that began exactly fifty years earlier, in Oslo, Norway. This relay carries the torch from Olympia, Greece, to the site of the games, where the torch for that Olympics is lit. A variety of people are honored by carrying the torch a short distance. In the United States 12,012 people would be selected to carry the torch 13,500 miles, passing through 46 different states. For the Salt Lake City Games the theme of the relay was “Inspire,” and Americans were encouraged to nominate people who had inspired them for this honor. The Salt Lake Olympic Committee was permitted to select 3,500 people—and received more than 50,000 nominations. Many people on the committee felt that Mitt should carry the torch, as his work had ensured the Games would be a success. Mitt refused, and instead nominated me. It was a wonderful gesture, but initially I was a little embarrassed by it. I read many of the hundred-word essays nominating people and was really touched by them. These were average Americans, the kind of people who are never in the headlines, but who spend their time helping others by their work or the example they set. These were teachers and doctors, blind students who tutored others, firefighters who risked their lives to save others, people in wheelchairs living full and productive lives. In our celebrity-based culture, it was gratifying to see these people receive even a little bit of the recognition and appreciation they had earned. And boy, I certainly didn’t feel that I belonged among them ,or that I had earned this honor.

Mitt insisted, and the boys all backed him up. I began thinking about it, and while I wouldn’t compare my battle with those of some of the other people who had been nominated, the chance to carry that torch really meant something to me. It would be my personal victory. I finally agreed, but only if Mitt joined me. I wanted it to be a family celebration.

Now all I had to do was run it. At the time Mitt nominated me, I really couldn’t run. But I started to train for it. It was only about a fifth of a mile; I knew I could do it. I immediately put on my tennis shoes, got a water bottle, got on the treadmill, and ran for…one minute. That was it, one minute. That definitely wasn’t going to work. The next day, I ran for two minutes, or as I liked to tell myself, twice as long as the day before. I was determined to do this. For weeks beforehand, I jogged and walked as much as I could, trying to increase my distance just a little every day. I had a path that I ran and walked and I would push myself to go a few steps farther every day. Once I had been able to run 5Ks without too much difficulty; now I was counting every single step. Believe me, I didn’t hear the stirring theme from Chariots of Fire in my head as I ran, just my exhausted breath. But whatever it took, I pushed myself.

After I had been doing this every day for several weeks, my sister-in-law came out for a visit and we went hiking in the mountains. At one point I noticed she was breathing hard, almost panting, and I thought, Wow, I’m the one with MS and I’m doing better than she is.

Of course, I wasn’t carrying anything in my hand. And there was no one on the sidelines watching me.

My run was to take place on the sixty-fifth and last day of the torch relay. By the time it reached Salt Lake, the torch had become a symbol of American resilience after the attacks of 9/11. Heroes had carried it through Ground Zero in New York, past the Pentagon in Virginia, and by the field outside of Shanksville, Pennsylvania. Along every mile of the route, people had stood on the sides, often waving American flags, while the runners in their own way paid tribute before handing the torch to the next bearer.

By the time the flame got to me, it had traveled by cars, planes, ships, trains, dog sleds, skis, snowmobiles, ice skates, and even sleighs. Americans had cheered, saluted, and often cried. All Americans then were sharing the enormous pain caused by the 9/11 attacks, and the relay played a small role in the healing process. We would actually help bring the torch into Salt Lake City. I was thrilled to be able to do that. Mitt and I had moved to Utah so he could try to untangle the Olympics and I could try to recover from my disease. During the three years we were in Salt Lake City, the residents had given us so much that I really was thrilled to be carrying the torch into the city. 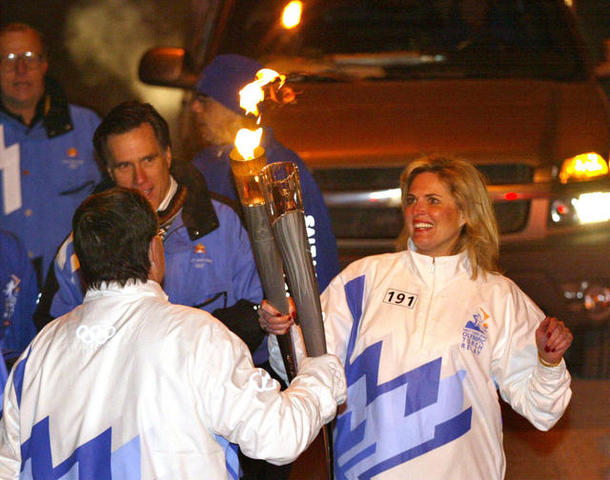 The first thought that came into my mind when I was handed the Olympic torch on a residential street in East Salt Lake City was probably the same thought as the almost twelve thousand people who had carried it before me: Don’t drop it!

I grasped it tightly in my right hand, held it up triumphantly, and began jogging. I was so psyched up for that moment that I took right off—leaving Mitt, Josh, and his wife Jen, standing there dumbfounded. Where did that energy come from? I was running almost completely on adrenaline. Josh quickly caught up with me. “Mom?” he yelled.

“I can do it!” I yelled right back at him, “I can do it!” That stretch seemed like the longest distance I had ever run, and also the shortest. My little run took forever and seemed to last a second. As I ran, I saw all my friends from Margo’s barn cheering me on. Her children were holding a sign, “We Love You, Ann!” It was a glorious moment, and I was deeply touched.

I wasn’t as invincible as I had hoped to be, though. Toward the end, I started getting tired. That torch was getting mighty heavy. Mitt reached over and helped me hold it up, and that’s the way we finished our portion of the run together. It was so appropriate.”

For more from Ann Romney, and your own copy of this magnificent book, visit Deseretbook.com. And for some of Ann's favorite recipes and family traditions, don't miss The Romney Family Table: Sharing Home-Cooked Recipes and Family Traditions, available at Deseretbook.com.

You can also learn more about Ann Romney in her interview with LDS Living.