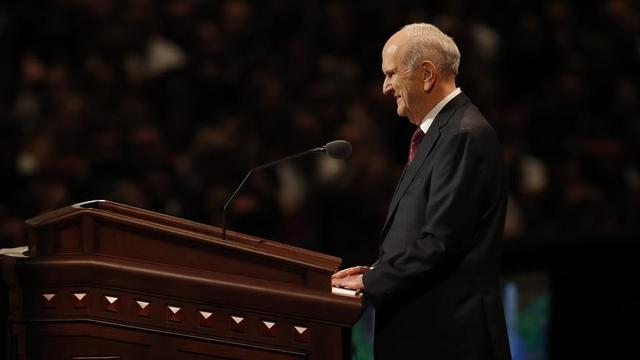 Find out more about the eight temples announced, a historic general authority call, the Church's new temple website, and more!

► You'll also like: One Quote from Every Talk Given This General Conference

On April 4, the First Presidency announced that, effective immediately, children of parents who identify themselves as lesbian, gay, bisexual, or transgender may be baptized if the custodial parents give permission for the baptism. In addition, "a nonmember parent or parents (including LGBT parents) can request that their baby be blessed by a worthy Melchizedek Priesthood holder," an article from Newsroom states. And lastly, the Church's Handbook will no longer characterize same-gender marriage by a member as apostasy. The article on Newsroom clarifies, "While we still consider such a marriage to be a serious transgression, it will not be treated as apostasy for purposes of Church discipline." The First Presidency declared, "These policy changes come after an extended period of counseling with our brethren in the Quorum of the Twelve Apostles and after fervent, united prayer to understand the will of the Lord on these matters."

Brother Pace was born in Buenos Aires, Argentina, on January 1, 1957. He married Anne Marie Langeland in 1978. They are the parents of seven children and 17 grandchildren.

Brother Camargo currently works as vice president of curriculum at BYU–Pathway Worldwide. He and his wife, Patricia, are the parents of three children and 13 grandchildren.

Brother Newman is a serial entrepreneur and has founded several successful software companies. He and his wife, Lucia, are the parents of six children and eight grandchildren.

During the Saturday afternoon session of general conference, we sustained Elder Peter Matthew Johnson, who Church Public Affairs confirmed is the first African-American general authority in Church history. Elder Joseph W. Sitati, who was sustained as a General Authority Seventy in April 4, 2009, was the first black African called as a general authority. The Church continues to call and sustain leaders from around the world.

We have confirmed with Church Public Affairs that we have the first African-American general authority in the history of @LDSchurch. Elder Peter Johnson was just sustained as a General Authority Seventy. #generalconference @DeseretNews— Tad Walch (@Tad_Walch) April 6, 2019

President Dallin H. Oaks of the First Presidency of The Church of Jesus Christ of Latter-day Saints announced the calls of 10 General Authority Seventies and 55 Area Seventies during the Saturday afternoon session of the April 2019 general conference.

Find out more about these new General Authority Seventies and the Area Seventies called here.

5. Statistical report released, shares we now have 16.3 million Church members and over 100,000 full-time and service missionaries.

For the information of the members of the Church, the First Presidency has issued the following statistical report concerning the growth and status of the Church as of December 31, 2018. 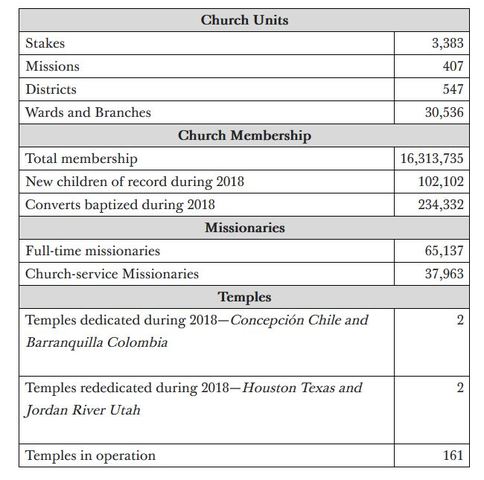 "The temple is the house of the Lord," Elder David A. Bednar declared as part of his general conference talk Sunday afternoon. With the increased focus on home-centered, church-supported gospel learning, Elder Bednar talked of the implications of the recent changes in the Church, particularly the fact that our homes are now the best and first MTCs, Sunday School classes, family history centers, and temple preparation classes. He shared a sneak peek of a brand-new Church resource to help families know what they should or shouldn't say as the teach about temples in their homes, temples.churchofjesuschrist.org. With this website, Church members and others now have access to a variety of resources related to the temple, including a video about sacred temple clothing, that can act as guideposts as we share, teach, and learn about temples in our homes.

At the conclusion of the 189th Annual General Conference, President Russell M. Nelson of The Church of Jesus Christ of Latter-day Saints announced plans to build eight new temples. This brings the total number of operating temples (162) and temples announced or under construction (47) to 209 worldwide.

President Nelson also provided an updated on the renovation of pioneer-era temples. He said plans for the renovation of the Salt Lake Temple, Temple Square and the adjoining plaza near the Church Office Building will be announced on Friday, April 19, 2019. He also said the Manti and Logan Temples will be renovated in coming years.