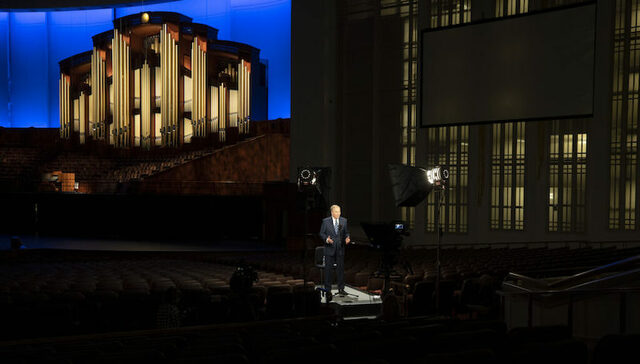 Announcer Lloyd Newell has been recording the ‘Spoken Word’ for 30 years. Here’s what you might not know about those messages

Thirty years ago, President Gordon B. Hinckley, then a counselor in the First Presidency, extended a call to Lloyd Newell to be the announcer of Music & the Spoken Word.

Many are familiar with Newell’s voice and the messages of hope that he speaks. But some may not know that the BYU professor—who worked as a television anchor and was a corporate trainer and consultant at the time of his call—writes nearly all of the messages that are broadcast each week.

“Because my responsibility is to come up with a spoken word every Sunday, I’m always pondering, reading, looking, and listening—always on the lookout for a story, thought, insight, anecdote, or principle that I can share on the broadcast. I look for angles, themes, and approaches that are fresh, new, insightful, and have universal appeal,” Newell told The Tabernacle Choir Blog.

According to Church News, Newell works several weeks in advance on the messages, writing with a person in mind such as a loved one, a friend or a person in the congregation. He also takes to heart the counsel President Hinckley gave him decades ago that each Spoken Word message should be an “inspirational gem.”

“People are wondering and worried about the future and some are even losing hope,” Newell told Church News. “We want to be a beacon of hope and light and truth and goodness to say there is goodness out there, there’s hope available—so stay with it and keep going. And just like this broadcast will be back in the coming day, we will be back as a nation and world.”

Learn about Newell’s process for recording Spoken Word during the pandemic at Church News.