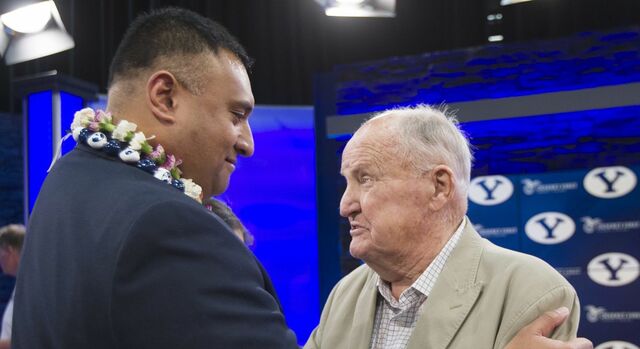 Latter-day Saint coaches have been rising in numbers since Brigham Young University head coach Kalani Sitake played under legend LaVell Edwards in the 1990s. Back in those days, Edwards was the “lone wolf” in the coaching world, but it’s a different game nowadays, reports Church News.

According to Church News, Whittingham had a successful college career at BYU, and Niumatalolo’s son also played at the Church-owned University. Reid was a graduate assistant coach at BYU in the 1980s. Additionally, there are a number of Latter-day Saint assistant coaches and coordinators who may be head coaches one day.

Sitake credits Edwards for the high bar he set while bringing BYU many a victory.

“And a lot can be attributed to LaVell Edwards and the way that he was as a head coach and the example that he set,” Sitake told Church News. “It only makes sense that people want to emulate Coach Edwards and be like him—and many have connections to him.”

READ ABOUT SITAKE’S APPROACH TO COACHING DURING THE PANDEMIC AT Church News.