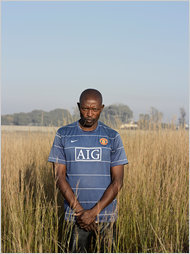 In June, the magazine published my article about a mob-killing in a shantytown near Johannesburg. The grisly scene had been recorded on video by a friend of mine, Golden Mtika, a freelance journalist who lived in the impoverished community. Golden himself was poor, the article explained, and he was saving money so that he could one day move his family to a safer place. The article also mentioned that he was a devout Mormon.

The next day, I received an e-mail that said: “Like your friend Golden Mtika, I am a member of the Church of Jesus Christ of Latter-day Saints (the Mormons). Another California Mormon businessman friend and I would like to offer our assistance.” This week, they gave Golden about $35,000 to buy a house. I was delighted by the news and phoned the main donor, a commodities trader. He was happy to talk about his motivations, though he did not want his name mentioned.