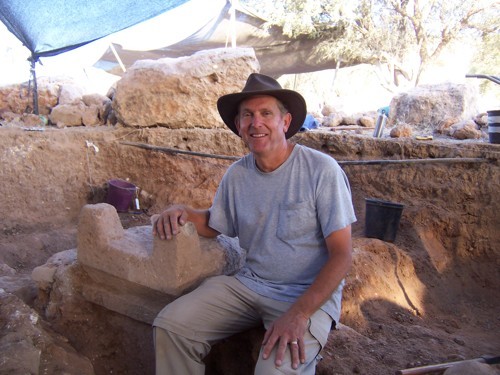 For the last 18 years, Brigham Young University archaeology professor Jeffrey R. Chadwick has been involved in excavating the ancient Biblical site of Gath, the capital city of the Philistine pentapolis and hometown of the towering warrior Goliath.

This summer, Chadwick led an international team of excavators at the site, situated in the area today known as Tell es-Safi, where they discovered a city wall and gateway that would have stood during the Iron Age, around 1100 to 800 B.C., the same period as 1-2 Samuel and 1-2 Kings in the Old Testament, Chadwick said.

“We’re getting a bit older now, but we’ve discovered a lot of things. We’ve excavated in several large areas of the site and think we have the entire history of the city mapped out during the ancient periods from pre-history right down to the Biblical times and down even to Crusader times when a fortress stood on top of the hill. King Richard the Lion-Hearted stayed overnight in the fortress a couple of times, according to history," Chadwick said.

“We’re very excited to discover not only fortifications and a gate from that period, but also several interior domestic dwellings that will give us an idea of what Philistine life was like during those periods. . . . But we haven't found any overly large human bones."

Chadwick, who has more than 35 years of excavating experience, also teaches at the BYU Jerusalem Center. He joined the Tell es-Safi/Gath project in 2001 under professor Aren Maeir of Bar-Ilan University in Israel, the licensee and overall project director. As the project's senior field archaeologist, Chadwick directed excavations in Gath's upper and lower city.

In June and July, Chadwick supervised 36 excavators, including student groups from Colorado Christian University, the University of Melbourne (Australia), and Bar-Ilan University, over a four-week period. Staff and volunteers from New Zealand, China, Switzerland, and the United States joined the dig, Chadwick said.

Chadwick cited accounts in 1 Samuel where Gath is known not only as the home of the massive Philistine champion Goliath, who was slain by young David, but David later sought refuge there while trying to escape King Saul's soldiers (see 1 Samuel 21:10-15). The captured Ark of the Covenant was also stored there by the Philistines (see 1 Samuel 5:8-9).

Experts don't believe Goliath, a giant elite warrior and leader in the Philistine army (see I Samuel 17), was buried in Gath. It's more likely that his remains are entombed closer to his execution site, seven miles to the east, Chadwick said.

What has two decades of excavation and discoveries helped scholars learn about Gath?

One thing the digging has revealed is the Philistines were a formidable presence in their ancient homeland, Chadwick said.

"The interesting thing about Gath is that its remains spread out over some 500 acres," Chadwick said. "That constitutes the largest ancient city in the Holy Land during the Iron Age. It was larger even than Jerusalem was at its height. In King Solomon’s time, when Jerusalem was 25 acres, Gath was 500 acres. So it was a giant of a city and it’s more or less fitting that it was the home of the giant spoken of in 1 Samuel."

Research and discoveries at the site also provide greater understanding of what really existed in Biblical times.

"I would say that we have better understanding of several critical Biblical issues from the explorations of Gath than we did before the site began to be excavated," Chadwick said. "We understand it’s a larger capital city of the Philistines that anyone had thought."

The Gath dig started in 1997. Chadwick estimates it's within three for four seasons of being shut down.

When asked if he's ever been compared to the Harrison Ford's character in the Indiana Jones movies, Chadwick laughed.

"Yeah, well, people like to say that about anybody they know who does archaeology. I don’t know whether it accrues that much honor to you or not. We joke about it," Chadwick said. "We’re careful not to identify with him too closely. He doesn’t ever seem to have done much digging, but more or less kind of romping around and robbing things. But that’s why it’s a good movie."