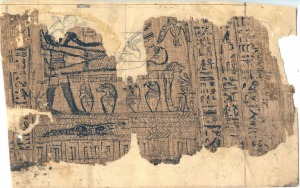 Mormon fascination with the ancient world stems largely from an exotic corpus of writings found in the canon of The Church of Jesus Christ of Latter-day Saints. One book in the Church’s canon, the Book of Abraham, which Joseph Smith claimed to be an inspired translation of some ancient Egyptian papyri, has captured Mormon imagination with a vibrant narrative involving the eponymous biblical patriarch, human sacrifice, far-off lands, divine encounters and a grand cosmology.

One BYU professor, Kerry Muhlestein, has devoted a good portion of his academic career (over a decade) investigating the saga of the Book of Abraham. Muhlestein, who holds a PhD in Egyptology from UCLA, is an associate professor of ancient scripture at BYU. According to his faculty bio on the BYU Religious Education website, Muhlestein “is the director of the BYU Egypt Excavation Project,” which has led successful archaeological digs in Egypt, and has academic expertise in fields including “Ancient Egypt, Hebrew Bible, [and the] Pearl of Great Price.”