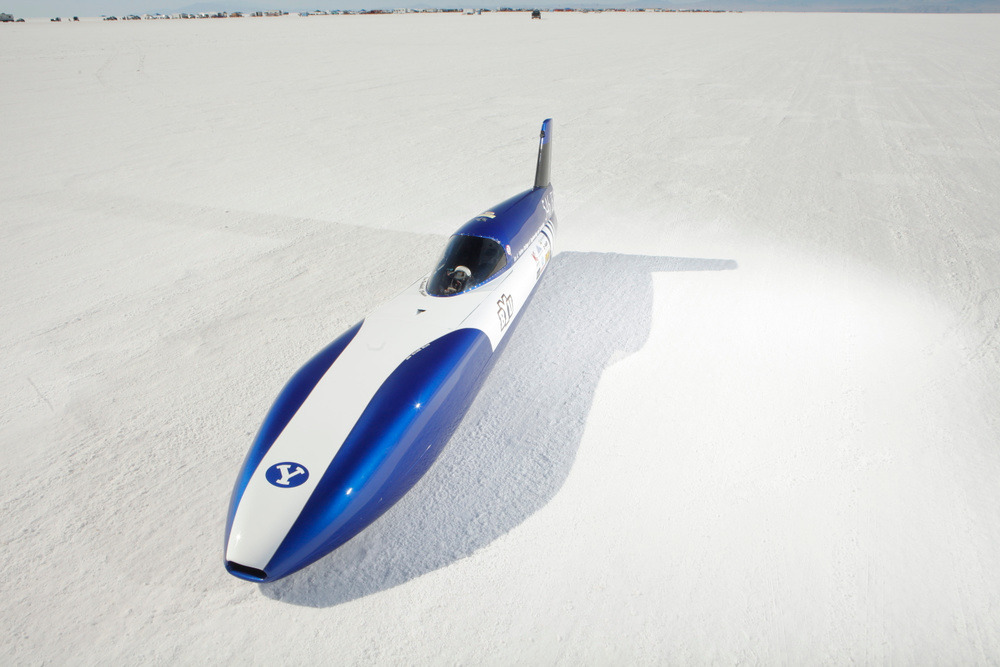 An electric car built by BYU engineering students has once again set a world land speed record, this time besting the previous mark by nearly 50 mph.

Electric Blue, an E1 streamliner designed and modified by more than 130 BYU students over the past 10 years, averaged 204.9 mph on two qualifying runs this month. The new mark obliterates the previous record, 155.8 mph, which coincidentally was set by the same BYU car in 2011.

“When we set the record three years ago we felt like we left a lot on the table,” said BYU student and team captain, Kelly Hales. “On paper we thought we could get 200 mph but we never had the conditions just right—until now.”

The car notched the record this month in front of approximately 180 teams and their cars at the Bonneville Salt Flats. Jim Burkdoll, president of the Utah Salt Flats Racing Association, drove the car to set the record, which was certified by the Southern California Timing Association.

Electric Blue is called a streamliner because it has a long, slender shape and enclosed wheels that reduce air resistance. BYU’s car is in the E1 category, which means it is electric and weighs less than 1,100 pounds. Other streamliners, notably one built by Ohio State University students, have achieved higher speeds but in much heavier vehicles requiring different weight classes.

BYU students custom-built the lightweight carbon fiber body of Electric Blue over a six-year period, with the help of computer programs that model wind tunnels. Aerodynamic performance and lithium iron phosphate batteries helped the car reach its high speeds over the last four years of runs.

“We were going to retire the car last year when head faculty advisor, Perry Carter, left for an LDS mission, but we petitioned for one more year,” Hales said. “Now the car will officially retire with a record we think will be unbeatable for a while.

About half the students who have worked on the streamliner program over the years have been manufacturing engineering technology majors, about 40 percent mechanical engineering majors, and the rest from various other disciplines, including electrical engineering. Many worked on the car as part of an annual capstone course, but most were unpaid volunteers.

Manufacturing professor Mike Miles, who stepped in for Dr. Carter as faculty adviser last year, said the generous support of Ira Fulton made all the difference in providing students with an incredible experience.

“This was kind of the last hurrah; we wanted to give them one final shot,” Miles said. “Ira Fulton kept chipping in financial support and we’re so grateful he did because the results were fantastic. I congratulate Perry Carter, Kelly Hales, and all of the students who worked on this project, for an amazing achievement.”

As for its final resting place of Electric Blue, that remains undecided. It could end up in a racing museum or on display in BYU’s engineering building—but it certainly won’t be dismantled.