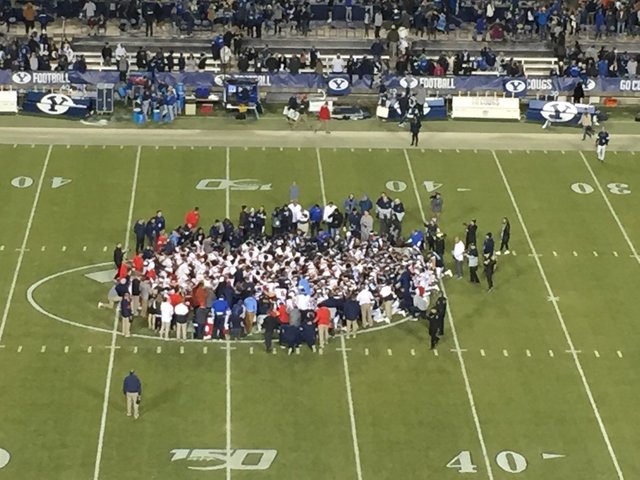 Just after playing 60 minutes of competitive football, Liberty and Brigham Young University players met at midfield to shake hands and share congratulations with one another. However, instead of speaking quickly and heading towards their separate locker rooms, players went to the ground, together, taking a knee to pray. BYU head football coach Kalani Sitake said of the moment, “It was nice to share the field and then have a word of prayer in the middle of the field with them. I thought that was really special, having two teams that are based on Christian values and everything—I thought it was really cool.”

Both Liberty and BYU are private, Christian universities and, on Saturday, November 9, 2019, the school’s football teams played each other for the first time.

After the close win, BYU players spoke to the media about how unique the game was. Senior safety Austin Lee commented, “Throughout the game, I felt like they had great sportsmanship. It threw me off, it surprised me. You know, you usually don't do that and so I thought it was very cool. And it shows a lot about the character of their team and their standards.”

After seeing Lee’s quote on Twitter, Liberty’s head football coach Hugh Freeze replied, saying, “I can say the same about the BYU Football [team] and staff.”

Both football teams are independent, meaning neither team is in a conference, which makes compiling a complete season schedule a difficult task. However, as soon as Liberty began the process to move to FBS status (the highest division of college football) in 2017, one of their first calls was to BYU.

Founded in 1875, BYU has created a culture of faith and a football fanbase that stretches across the country. Liberty University was established in 1971 and hopes to do the same, looking at BYU as a role model. Liberty athletic director Ian McCaw said, “BYU is very much a program that we aspire towards as a faith-based school that’s had tremendous success, including winning the national championship.”

The Flames will next face Virginia and the Cougars play Idaho State this Saturday, but both Liberty and BYU know they’ll likely not play another game this season like the one the schools just did.

For more about Liberty and BYU, read, "What’s at stake for Liberty Saturday at BYU? The realization of a 48-year vision," and "Jerry Falwell’s mission to build Liberty University into academic, athletic powerhouse highlighted in video during BYU game."