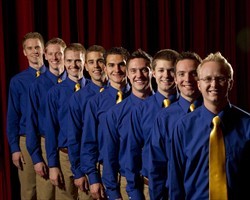 BYU’s male a cappella group Vocal Point returned to compete in the Top 10 of NBC’s “The Sing-Off” on Monday. After their classic rock ‘n roll performance, the judges had only positive things to say, and they will be continuing onto the next round of the competition.

Vocal Point had the crowd dancing when they sang their version of "Footloose." Joining them was their teammate Ben Murphy, who had been home in Australia spending time with family after his father died from Leukemia.

“I know that all your brothers here are really happy that you are back,” said Sing-Off judge Sara Bareilles.

Although Ben was “apprehensive” about his first time on stage, judge Ben Folds noted that his baritone guitar sounds added a lot to their performance.