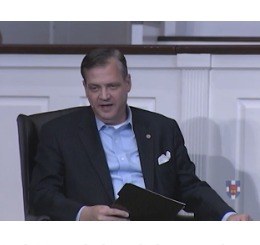 Baptist panel asks: Can Christians vote for a Mormon?

Addressing an issue on the minds of many evangelical voters as a Mormon runs for president, a Baptist seminary panel said Tuesday that evangelicals must jettison -- for the good of their faith -- the idea that the White House occupant must be a "religious mascot" for Christianity.

"I heard someone in recent days say, 'I would never vote for anyone who is not an authentically professing evangelical Christian,'" said Russell D. Moore, dean of the school of theology at Southern Seminary. "Well, if that's the case, then as far as I can see, you have about three candidates in the last 100 years or so ... that you could possibly vote for: William Jennings Bryan, Jimmy Carter and George W. Bush.

Read the rest of this story at sbcbaptistpress.org