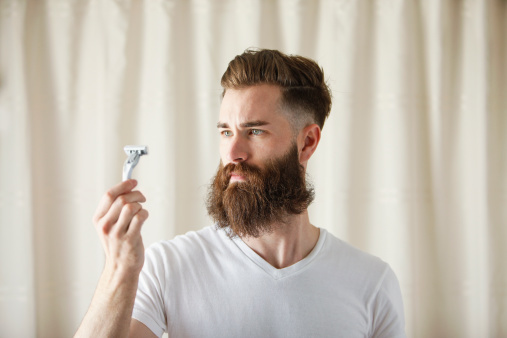 When Missionaries Were Required to Have Beards (and Why It Changed)

From the soul patch to the chin curtain to the full beard, whether men in the Church should grow facial hair has been a topic of discussion the past few decades.

But the struggle with the stubble hasn't always been what it is today.

With Brigham Young taking the no. 18 spot on time.com's "25 Most Influential Beards of All Time," it's pretty clear there was a time when Mormon leaders sported epic beards and there's nothing prohibiting Mormon men not serving missions or attending BYU from growing facial hair.

In fact, the clean shaven look, favored by BYU's dress and grooming codes, the missionary dress code, temple workers, and most Church leaders, didn't begin gaining popularity until the 1960s.

Some early missionaries were even required to grow beards. Before President Heber J. Grant was called to preside over the British and European Missions in 1903, his predecessor, Elder Francis M. Lyman, asked all missionaries in the area to grow beards because "facial hair added dignity" (Journal of Mormon History: Vol. 14: Iss. 1, Article 1).

It wasn't until 1951, when President David O. McKay became the first prophet since Joseph Smith to remain clean shaven, that the policy for beards in the Church began to change.

During President McKay's time as the leader of the Church, beards weren't as much a sign of "dignity" as they had been in the past.

As a result, BYU made it a part of its official dress and grooming standards to place a full ban on facial hair on campus during the 1970s, according to an article by The Daily Universe.

In his 1971 address to 25,000 BYU students, Elder Dallin H. Oaks, the then-president of BYU, shared that there is nothing inherently wrong with beards or facial hair, but, "In the minds of most people at this time, the beard and long hair are associated with protest, revolution, and rebellion against authority. They are also symbols of the hippie and drug culture. Persons who wear beards or long hair, whether they desire it or not, may identify themselves with or emulate and honor the drug culture or the extreme practices of those who have made" (Elder Dallin H. Oaks, "Standards of Dress and Grooming," New Era).

Today, male BYU students are allowed to grow mustaches but not beards unless for medical, theatrical, or religious reasons. Missionaries are also not allowed to grow facial hair unless authorized by their mission president. While there are no specific guidelines about facial hair in the Church handbooks, male Church leaders and temple workers also generally remain clean-shaven.

And while the shift to no beards for missionaries and BYU students is fairly recent in the Church's history, Church spokesman Eric Hawkins told USA Today in 2015 that Church policies change from time to time and are "reflective of cultural norms in different parts of the world and at different times."

However, there's a chance that beards may once again become popular among Mormon leaders and temple workers.

As Elder Oaks said in his 1971 BYU address regarding the ban on beards, "The rules are subject to change, and I would be surprised if they were not changed at some time in the future."