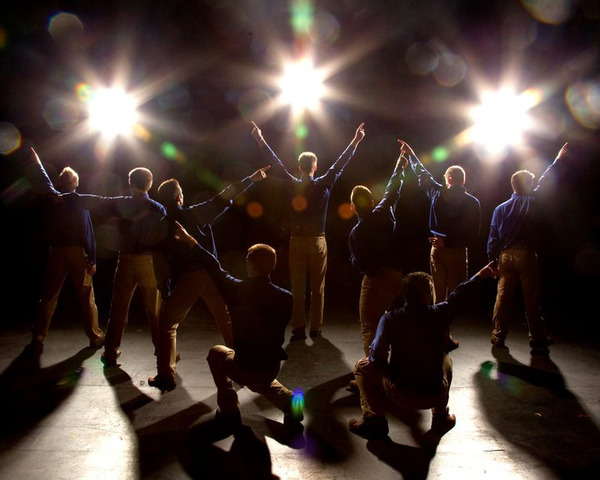 Behind the Scenes with Vocal Point

It started with a handmade flier using a sharpie, posted all around BYU campus 20 years ago: come audition for an all-male a cappella group. “Our hope was to create a group that could continue after we left and that could become a tradition at BYU,” says Bob Ahlander, who founded the group with his friend Dave Boyce. But what started as a small group of BYU students began garnering attention around campus, began getting support from the honors program and music department, and was eventually adopted into the university as a class and an officially endorsed ensemble. This year, the group has grown to more drastic heights as it was accepted onto The Sing-Off, an NBC a cappella singing competition.

Getting Settled
So the group flew to Los Angeles and was immediately immersed in an experience like none they’d ever had before. “Normally we have a semester to put a concert together,” says McKay Crockett, one of the tenors and lead singers of the group, “but with this experience we found out what song we were singing on Saturday [the show was taped on a Friday] and by Monday we had to have it ready for the producers to listen to, and if they didn’t like it they’d give us a new song, then we had to put in choreography, and then we had to try on costumes to make sure they all fit. There was just a very fast-paced, quick-moving tempo.”

Amid all the chaos, though, the group members had another goal in mind: to hold true to their values and “to share joy and happiness through song,” Crockett explains. “We didn’t have to be pushy; we didn’t have to be preachy. People could just feel something was different and they would ask questions.”

Hitting the High Notes
In the beginning, the group members were able to suggest song ideas and were very involved in deciding what they wanted to sing, but as the show progressed, they lost that flexibility. “[The producers] would assign music to all of the groups and say, ‘This is the song you will be singing, have fun, good luck,’” Crockett recalls.

Even when it got to that point, though, they still held their moral high ground. When the producers handed them a song with lyrics they weren’t comfortable with, they said they couldn’t do it. “They were really, really supportive of our wishes as far as our standards go,” says Jake Hunsaker, another tenor and group front man. “They didn’t even blink . . . they took the piece away and brought us a new one the next day.”

Unfortunately, they were assigned those songs on a Saturday and had to have them ready to show to the producers on Monday. Since they didn’t work on Sundays, that meant they only had one day to get it all figured out.

But taking Sunday off to go to church afforded yet another opportunity to show others what the guys of Vocal Point were really all about. “When you’re on reality TV you don’t own yourself, so we always had a wrangler with us telling us where to be and when to be there and kind of keeping us on a leash,” Hunsaker says. “So we’d take a wrangler to church with us.”

Learning All the Right Moves
After the songs were arranged, there was still choreography to work out. Even though there were professional choreographers to assist the groups, that didn’t mean learning all those moves was easy. Hunsaker’s favorite performance was their dance-intensive “Every Little Step” by Bobby Brown, but they almost didn’t survive it. “None of us know how to move naturally, so when the choreographers brought in the choreography for the piece, we kind of died,” he says. Prayers at the beginning and end of every rehearsal helped them to achieve their best.

And those around them noticed. Near the end of their experience on The Sing-Off, a choreographer approached some of the Vocal Point members and explained, “You’ve helped me to see that I can bring God into my life and into the entertainment business. There’s not a lot of talk about God and faith in this industry, but I feel like I can have them both in my life, and you guys showed me how to do that.”

If all that wasn’t hard enough, part way through the show, the Vocal Point boys all started school. “It was something that you just have to grit your teeth and get through,” says Hunsaker. “You come back from a 15-hour day, and your call time would be at 7:30 in the morning, and you get home sometimes at 11, 12, or 1 a.m., and you have three or four hours of homework on top of that.”

The long hours that everyone was working prompted one producer to ask them, “How on earth do you guys do this without coffee? I think the rest of us would keel over and die if we didn’t have our morning coffee every day. Do you guys have a vitamin that you take?”

Being an Example to Those Around Them
But while it may have been almost impossibly hard work, they also had fun times to balance it out. The members of Vocal Point forged close friendships with many of the other groups on the show. “We’re just a rowdy bunch of kids that want to have fun,” Hunsaker says, “and so between takes or between runs of the show when we’re all just on stage and we all have mics and no one’s really doing anything, out of the blue someone from AfroBlue or the Yellow Jackets would lay down a beat.” Quickly it would turn into an impromptu sing-along with rapping about the people on the show, and “then everyone would join in, and it’d be a big dance party.”

Sometimes their interactions with others on the show were humorous. Once, one of the workers on the show tried to hug one of the guys but stopped herself and said, “Oh, I can’t do that, right?” The guys were quick to put that notion to rest, but when soon after a rumor started circulating that they also got up at 6:30 every morning to study and start rehearsing, they realized someone might have found a missionary handbook in an attempt to learn what these Mormon guys could and could not do. Other interactions became great opportunities: a member of another group began investigating the Church,  reading the Book of Mormon, and even attended general conference with them in October.

“I truly believe that God works in mysterious ways, and I truly believe that Vocal Point, in its awkwardly endearing kind of way, was able to bring the Spirit to people who may not have had access to it in another way,” Crockett says. “We just had to be ourselves and the spirit of good and positive living that comes from Jesus Christ and what we are a part of really shines through.”

Bearing Testimony on TV
Their influence wasn’t limited to those with whom they interacted on the set, though. When the show eventually aired on national television, America could see the nine young men praying together before a performance. But one of the most obvious opportunities for missionary work came in a painful way: baritone Ben Murphy missed the first few weeks of the show because his father passed away.

“As far as my dad’s passing, in some ways I feel like the show was a wonderful opportunity to share our beliefs,” Murphy said in an interview with BYU news. “It certainly gave us a great forum for us to be able to share a message that I think Vocal Point is centered around, and that’s not only to bring happiness, but also the message of the gospel and how that’s central to our personal beliefs.” The Vocal Point members were able to sing Puff Daddy’s version of “I’ll Be Missing You,” and Ben was able to bear testimony on national television that “because of my personal beliefs, I know that I can see my father again, that he’s in a better place.”

“It’s not often that you have a national television show as your forum to share your beliefs with people,” Crockett says. “You don’t know why things happen the way they do, but the Lord knows.”

And because of experiences like that, the guys are okay they didn’t end up winning The Sing-Off. “We got to do what we wanted to do, and that was to attempt to share our happiness and joy through music with people,” says Crockett. “Winning it or not, being able to reflect a positive light on the university and on the Church most definitely makes the whole experience worth it. We’ll never know how many people needed to hear a certain song or were interested in the gospel because they saw that happy bunch of Mormon kids on that TV show. . . . Yeah, we didn’t win, but a lot of good was done and we’ll continue to do that good, and because of the show we’ll be able to do that for many more people than we would have before. . . . The Sing-Off was just a springboard for Vocal Point.”

To listen to Vocal Point and see them in action, visit byurecords.com.