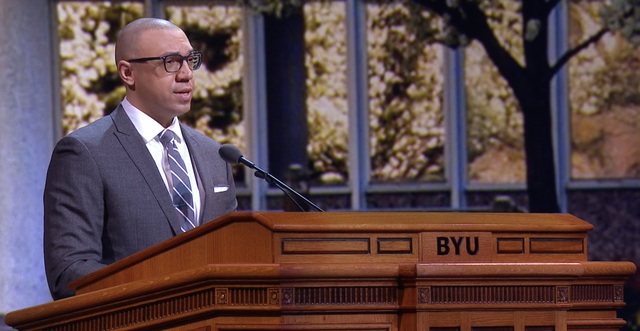 Gabriel explained that one strategy of the adversary is to “distort a foundational tenet of the plan of salvation—that we are all equal spirit children of Heavenly Parents.” The adversary effectively leads many to believe that various racial groups are inherently different and that certain racial groups are better than others.

“Without question, it is a sin to believe that the color of one’s skin and cultural heritage makes one inherently better than another,” he said.

Gabriel, a member of BYU’s Committee on Race, Equity, and Belonging, explained that racism is counter to what the Savior taught. He said the Savior suffered for those who have experienced the painful effects of racism, and if we are to alleviate racism in our world, we must first acknowledge its existence.

“To pretend that race is unimportant by saying ‘I don’t see race’ or to falsely diminish the impacts of racism on the lives of Heavenly Father’s children does nothing to stop racism,” Gabriel taught. He later added, “The Savior took upon Himself sin for which he was not responsible. He did so because He loves us; we can do so because we love Him.”

Gabriel is the first Black faculty member to give a campus devotional in 14 years. Although there have been a number of Black speakers at the school’s forums in the past few years, the last time an African American faculty member gave a devotional address was February 6, 2007. According to BYU's student newspaper The Daily Universe, that address was given by now-Elder Peter M. Johnson, who at the time was a professor of accounting at the school.

Gabriel told The Daily Universe that of the 1,467 faculty at BYU, six are Black. He explained that this is in part due to the demographic features of The Church of Jesus Christ of Latter-day Saints. He also said that receiving a PhD is stratified by race.

Gabriel added that the school's efforts to increase diversity in devotional and forum addresses has been “absolutely fantastic” and he hopes that continues so people can learn from one another's experiences.

►You may also like: ‘Of course, Black lives matter’: President Oaks speaks on ‘Racism and Other Challenges’ at BYU devotional