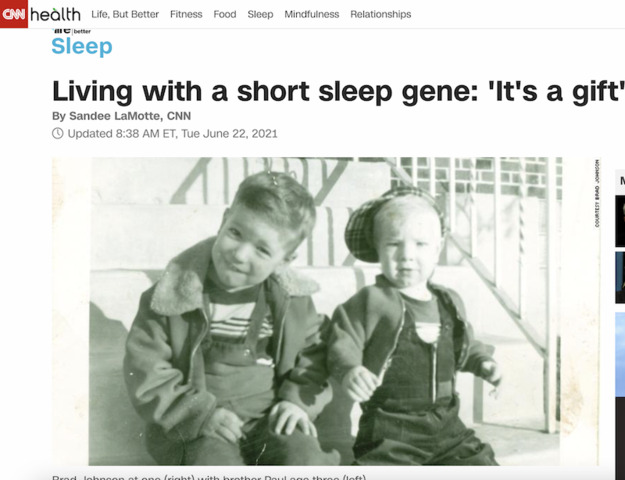 The curse of sleep deprivation—anything less than seven or eight hours of shut-eye at night leaves most adults struggling to function at best and cranky at worst. Maybe some people have even dreamed of what could be accomplished if the body didn’t require so much rest.

But for many members of the Johnson family, including Elder Paul V. Johnson who will soon be a member of the Presidency of the Seventy, they don’t dream of such things—it’s their reality.

A CNN article recently highlighted the Johnsons, a Latter-day Saint family of eight children. Of those kids, more than half only needed about five hours of sleep at night. But even that is an understatement; not only did they need little sleep to function, but they could be extremely productive with the amount of rest they received. As children, in the early morning hours, they would participate in all kinds of activities from practicing basketball to reading to pursuing other hobbies. And even now as adults, their sleep schedule hasn’t changed.

“I’ve never been normal when it came to sleep,” Brad told CNN. “Other people, even some of my siblings, slept eight, nine, 10 hours a night. I just couldn't do it, it was physically impossible. If you paid me a million dollars to sleep eight hours tonight, I couldn't.”

The trait seems to have been inherited from their father, who was also slept little. On the other hand, their mother and three other siblings could easily sleep the night away. But how did the five Johnson siblings get so lucky? Back in 2005, Chris Jones, now an emeritus professor of neurology at the University of Utah, collected the family’s blood and DNA samples. Since then, it has been determined that the Johnsons have what scientists call the “short sleep gene,” and in 2009, a finding was published on the topic.

“There was a mutation in the gene DEC2 which caused short sleepers to stay awake longer. Since then, the team has discovered two more genes—an ADRB1 mutation and a NPSR1 mutation—which alter neurotransmitters in the human brain to create short sleep,” CNN wrote.

In addition to creating short sleep, research has shown that this gene mutation is also associated with positive personality traits. Short sleepers are often ambitious, positive, outgoing, and optimistic. Many short sleepers who were tested also tackled big projects like running marathons. Another decided to build a violin and actually accomplished it.

Although they previously wondered whether they had a sleeping disorder, being “short sleepers” has come in handy for the Johnsons. Whether that’s professionally, in picking up new hobbies, or in volunteering for the Church, it has helped them accomplish many things in their lives. Brad Johnson also told CNN it’s been a “true gift,” giving him more time each day to do the things he loves with the people he loves.

Read more about the Johnsons and the short sleep gene at CNN.