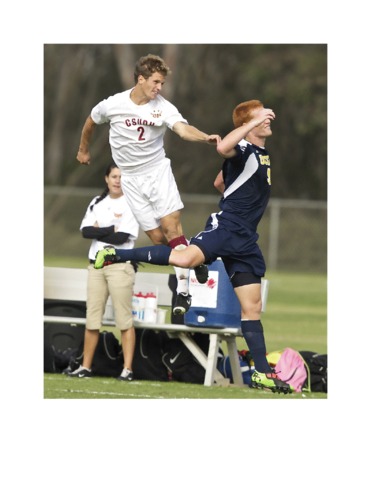 A Calif. Saint has proven that you don’t have to choose between athletic prowess, academic success and serving the Lord.

Scott Locken, a Huntington Beach native, was recently named to the 2010 ESPN Academic All-American 3rd team. Locken, along with eight other seniors, helped place the CSU-Dominguez Hills men’s soccer team to a 14-5-2 record. Even after a loss in the rainy CCAA championship game, Locken was recognized as one of 33 of the most talented players in the country, on and off the field.

He said his balancing act of sports, classes and the gospel came naturally to him.

“I’m used to it,” Locken said. “I developed the habits in high school with my schedule. One of my motivations was to get good grades so I could play soccer.”

It was more than just teachers and a rigorous schedule that drove him to scholastic superiority, however. Locken noted that his mom “is the most organized person in my world,” and that good grades and good soccer were a team effort from home.

His parents are proud, of course. His father Kris Locken showed where the priorities stood in their home. “We are extremely proud of him serving the Lord and honorably and successfully fulfilling his call as a full time missionary,” Kris said. “We are also proud of his being recognized as one of the nation’s best and smartest collegiate soccer players.”

Locken took two years off to serve a full-time mission in the Philippines, where a soccer game was hard to find. Kris Locken noted that it was a great sacrifice for his son, but not unexpected.

“He has worked extremely hard all his life to not only be good, but to always be one of the best at whatever he is doing,” Kris said. “He was that way as a missionary and has been that way as a soccer player.”

Scott Locken laughed off the achievement recognized by ESPN.

“I don’t think it’s that big of a deal,” he said. “It’s just who I am. Hard work pays off. [Playing in the CCAA championship game] was great. It was great to see all of that practice pay off by getting to that game. It was a lot of intensity and pressure.”

What advice does Locken give to athletes whose practice and game schedules cinch down their grades?

“Take advantage of study hall. Have some future goals. If you work hard, people will notice.”