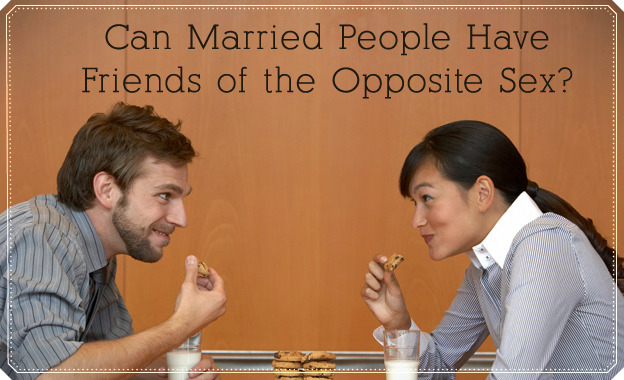 Can Married People Have Friends of the Opposite Sex?

My relationship with my now-husband began the way many relationships do: with a DTR (define-the-relationship conversation). It happened on a Friday night. But less than 24 hours later, on our first official date as boyfriend and girlfriend, I found the need to initiate another DTR.

Friends of the opposite sex can cause issues in relationships—from small bouts of jealousy to devastating cases of infidelity—but does that mean that once you’re in a committed relationship, you have to swear off all other friendships with those whose gender competes with that of your significant other?

In the case of my husband and I, we both agreed it would be ridiculous to stop talking to people who had been our closest confidants for years just because we were in the nascent stages of a relationship that could just as easily end in a couple weeks or months than last for eternity. But as the seriousness of our relationship progressed—eventually to engagement and marriage—those friendships did diminish somewhat. Not because we consciously chose to dial down the friendship in favor of the other person but because we now had a new best friend and closest confidant in each other.

But because those friendships do still exist, precautions and boundaries are also in order. When I’m texting my friend Kevin, I’ll share with my husband what we’re talking about. When he talks to Juliet on the phone, we’ll often be in the same room. Since both of our friends now live in other states, hanging out in person hasn’t been too much of an issue. But it can apply to other people and situations as well.

What happens when a female coworker wants to treat you to lunch as a thank you for some work you did on a big project at the last minute? What if a guy you know on Facebook messages you for some advice about a situation because he knows you’ve had a similar experience to what he's struggling with? (Join our discussion about marriage and technology here and read tips from a marriage and family therapist about social media within marriage here.) Or a high school crush ("we liked each other when we were 15, 20 years ago—how could that be a threat?") looks you up and wants to reconnect?

What do you do? No one goes looking for an affair, but if you open yourself up to precarious situations, you can end up like the frog in a cold pot of water that ends up getting cooked because the temperature is raised just one degree each hour—such a slight progression that you might never see it coming.

Some people have rules to never be alone with anyone of the opposite sex who is not your spouse, ever. Others have joint Facebook accounts and share an email address. There are those who cut off all contact with anyone who has been a prior romantic interest in their life. And then there are other people who don’t have any formal rules but operate on an honor system with their spouse and don’t feel the need for any other sorts of regulations.

So what works for you and your spouse? What precautions and boundaries have you set in place? How much guarding is necessary, and how much is just getting paranoid? Let us know in the comments below.

Marriage Technology Social MediaMarriage,Technology,Social Media,
Comments and feedback can be sent to feedback@ldsliving.com