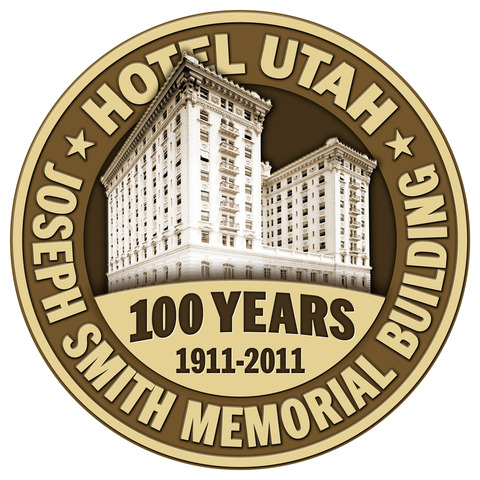 Celebrating 100 years with the Hotel Utah

The time is June 8, 1911, and the setting, the very heart of downtown Salt Lake City at the doors of a noble white palace as they open for the first time. Guest arriving in their horse-drawn carriages and some automobiles are greeted at the door with boutonnieres and corsages.

More than 500 persons attended the gala opening for the Hotel Utah, today more commonly known as the Joseph Smith Memorial Building (JSMB). A rare experience for Salt Lake, “the editor of the anti-Mormon Tribune sat to dinner across from the editor of the anti-Tribune Deseret News, while the president of the Roman Catholic women’s organization poured punch with the president of the Mormon Relief Society,” according to “The Hotel: Salt Lake’s Classy Lady.” This event marked a new sense of community throughout Salt Lake.

For longer than almost anyone can remember, downtown Salt Lake City has been crowned with the JSMB’s entrancing ten-story presence. Opened in June 1911, next week marks the 100th anniversary of this well-known symbol of Utah.

As a tribute to its 100 years, the JSMB will host magnificent celebrations from June 9-11. “If you walk in the lobby, it will be just like you’re walking back in time,” said Cynthia Terry, assistant director of Church Building Hosting. With the pianists playing period music, and the staff dressed to play the part, it’s sure to be an event you won’t want to miss.

The hotel’s beginnings go back to a long-needed movement for cooperation between the Church, business leaders, and other independent citizen groups.

Proposing the hotel, their ideal aim was to provide a social center, entertainment for exceptional visitors, a symbol of Mormon and non-Mormon cooperation, and the evidence of Salt Lake’s progress in the modern economy of the nation.

Over the years it would become just that. Considered a skyscraper of its time, it would play host to the community and the likes of presidents, royalty, prophets, musicians, politicians and celebrities as they attended dinner at the world-renowned Roof Gardens restaurant, listened to the melodious tunes of performers and stayed, or in the case of some prophets, lived in the hotel.

Decommissioned as a hotel in 1987 by its owner, the Church, it was reopened in 1993 as the Joseph Smith Memorial Building. After being converted from its hotel form to offices, banquet rooms, and community meeting halls over the closure, the building still shines as an integral part of its surroundings, which today include Temple Square and its gardens, the Assembly Hall, the Church Office Building and the old and new Latter-day Saint tabernacles.

“I think [the JSMB] is vital to downtown, I really do. It’s full of history and it’s the most open building on church grounds. It serves people from all over the world. It’s really the only place on the square for the public,” said Becky Gledhill, a JSMB hostess.

“It’s a place for meeting, for families, for finding refuge in the rain,” said Lois Magowan, another JSMB hostess. One thing the Hotel Utah was always known for was its fabulous service, and taking a tour today, you will feel absolutely the same way.

The time now is 100 years later, June 2011, and the Joseph Smith Memorial Building still stands as Salt Lake’s crowning white palace. Although the carriages have been upgraded to cars and the faces have changed over the decades, the ideal is still the same: bringing people together.