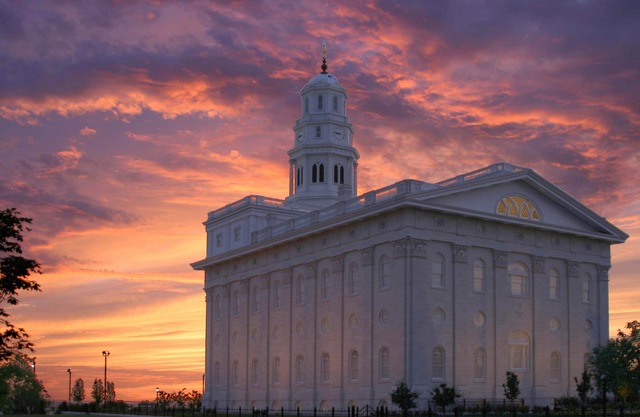 "Some early Latter-day Saints were Masons. Heber C. Kimball, Hyrum Smith, and others belonged to Masonic lodges in the 1820s, and Joseph Smith joined the fraternity in March 1842 in Nauvoo, Illinois," a Church Gospel Topics article states. "Soon after he became a Mason, Joseph introduced the temple endowment. There are some similarities between Masonic ceremonies and the endowment, but there are also stark differences in their content and intent."

The article provides context about the fraternal order of Freemasonry and its connection to early Church history. "Freemasons (or Masons) meet in lodges, where they ritually reenact a story based on the brief biblical account of a man named Hiram, whom Solomon commissioned to work on the temple in Jerusalem," the article explains. "During the reenactment, Masons advance by degrees, using handgrips, key words, and special clothing. In Masonic rituals, Masons commit to be worthy of trust and to be loyal to their Masonic brothers."

Many early United States revolutionary leaders, like George Washington and Benjamin Franklin, were Masons, and the secret society flourished in the United States during Joseph Smith's time.

Many Latter-day Saints were Masons, and a group of 18 Church members organized a Masonic lodge in Nauvoo in the December of 1841. "Joseph Smith and 40 others applied for membership the following day," the article explains. By March, the Prophet Joseph and other Church leaders became "Master Masons." The Nauvoo Lodge quickly became the largest in the state.

About the similarities and differences between the temple endowment and Masonic rituals, the Gospel Topics article states:

"On May 3, 1842, Joseph Smith enlisted a few men to prepare the space in his Red Brick Store in which the Nauvoo Masons met, 'preparatory to giving endowments to a few Elders.' The next day, Joseph introduced the temple endowment for the first time to nine men, all of whom were also Masons. One of these men, Heber C. Kimball, wrote of this experience to fellow Apostle Parley P. Pratt, who was on a mission in England. 'We have received some precious things through the Prophet on the priesthood,' Kimball wrote of the endowment, noting that 'there is a similarity of priesthood in masonry.' He told Pratt that Joseph believed Masonry was 'taken from priesthood but has become degenerated.' Joseph Fielding, another endowed Latter-day Saint and a Mason, noted similarly in his journal that Masonry 'seems to have been a Stepping Stone or Preparation for something else,' referring to the endowment.

"Mormons in Nauvoo who experienced both Masonic rites and the endowment acknowledged similarities between some elements of the two ceremonies, but they also testified that the endowment was the result of revelation. . . . Joseph and his associates understood Masonry as an institution that preserved vestiges of ancient truth. They acknowledged parallels between Masonic rituals and the endowment but concluded, based on their experience with both, that the ordinance was divinely restored.

"Emphasis on the similarities between the teaching styles and outward forms of Masonry and the temple endowment obscures significant differences in their substance. Masonic ceremonies promote self-improvement, brotherhood, charity, and fidelity to truth for the purpose of making better men, who in turn make a better society. During temple ordinances, men and women covenant with God to obey His laws for the purpose of gaining exaltation through the Atonement of Jesus Christ. Masonic rituals deliver stage-by-stage instruction using dramatization and symbolic gestures and clothing, with content based on Masonic legends. The endowment employs similar teaching devices, but it draws primarily upon the revelations and inspired translations given to Joseph Smith for its content."

The article also notes that while Masons strictly regulated who could join the society and restricted access to only men, Joseph Smith and later prophets hoped that the endowment could bless all  Saints who were prepared to make everlasting covenants with God.

"There are different ways of understanding the relationship between Masonry and the temple," the article concludes. "Some Latter-day Saints point to similarities between the format and symbols of both the endowment and Masonic rituals and those of many ancient religious ceremonies as evidence that the endowment was a restoration of an ancient ordinance. Others note that the ideas and institutions in the culture that surrounded Joseph Smith frequently contributed to the process by which he obtained revelation. In any event, the endowment did not simply imitate the rituals of Freemasonry. Rather, Joseph’s encounter with Masonry evidently served as a catalyst for revelation. The Lord restored the temple ordinances through Joseph Smith to teach profound truths about the plan of salvation and introduce covenants that would allow God’s children to enter His presence."

"It should be noted, from the beginning of this discussion, that the ritual is not the endowment, but how the endowment is taught and presented. 'Endowment' means 'a gift,' and the gift being given is promises and blessings. The ritual is the wrapping paper: it is how the gift is presented to us. . . . Prophets frequently adapt common symbols and language to convey sacred truths such as Paul’s use of the common folk belief in contemporary 'magic' to heal believers with special handkerchiefs (Acts 19:12).

"Researcher Michael Griffith points out that Solomon’s temple and the Mosaic tabernacle had several motifs in common with pagan religions including the Phoenicians and the Egyptians, yet God Himself instructed the Israelites on how to build the tabernacle (Exodus 25–30). . . .

"It should also be noted that not all temple rituals have Masonic counterparts. Washing, anointing, vicarious work for the dead, and sealing, for example, have no equivalent in Masonic ritual, but they do have parallels to other ancient religious rituals. Some of the temple rituals and symbols have ancient antecedents in the Bible, uniquely Latter-day Saint scriptures (such as the Book of Mormon and Pearl of Great Price), early Christianity, and ancient Judaism. Latter-day Saint scholar Dr. Kenneth Godfrey observes that sacred ceremonies existed all over the ancient world and were modified by Egyptians, Coptic Christians, Israelites, Masons, Catholics, and Protestants. 'Common elements include the wearing of special clothing, ritualistic speech, the dramatization of archetypal themes, instruction, and the use of symbolic gestures.' There is a wealth of evidence suggesting that the Latter-day Saint temple endowment restores authentic ancient Christian ordinances while utilizing Masonic imagery to teach and present those ordinances. "