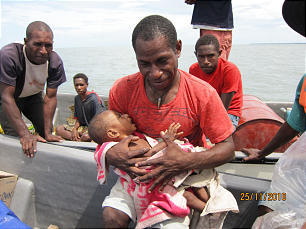 Church leaders were in the right place at the right time to respond to the immediate crisis of a devastating cholera outbreak recently in Papua New Guinea.

Elder Dirk Smibert and a small group of Papuan Church leaders arrived in Daru by dingy in the late afternoon of Nov. 11. Early the next morning they were advised that 11 members from one LDS branch had just died from a deadly cholera outbreak — an acute intestinal infection that leads to severe dehydration and death without treatment, spread through contaminated water and food.

"We arrived in Daru from having been up to Sogere where we had just formed a new district, as well as having visited the Saints in Isumo, when we received word of the tragedy," said Elder Smibert. "We had planned to merely transit in Daru before flying out the following day, and so we arranged to meet with the priesthood Leaders there for a training meeting the next morning. That next morning one of the branch presidents informed me that 11 of the members of his branch had just died from cholera."