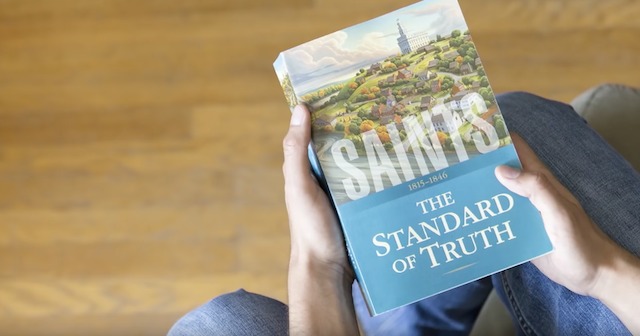 Later this year, the Church will release the first volume of Saints, a ground-breaking, four-volume series that details Church history like never before.

"Saints was prepared in response to the Lord’s commandment to 'keep the church record and history continually' (D&C 47:3)," Elder Steven E. Snow, a General Authority Seventy and Church Historian and Recorder wrote in the February 2018 Ensign. "Unlike past histories of the Church, it is a narrative history written in an engaging style that will be accessible to both youth and adults."

Beginning at the years leading up to the First Vision and ending in the current day, the content of all four volumes was carefully researched by Church historians and each manuscript was reviewed by general authorities, the Quorum of the Twelve Apostles, and the First Presidency.

Though Elder Snow points out in the Ensign article that these volumes are not scripture, they do include stories of imperfect men and women striving to become Saints through the Atonement of Christ.

"Church history helps us understand the lives of those who went before us—the challenges and difficulties they faced—and how they overcame them," Elder Snow says in a video about the series. "It gives me hope that the Lord can work through imperfect people, even me."

The first chapter of Saints: The Standard of Truth is available in the February Ensign with the release of the book planned for later this year. The books will also be available in 14 languages for order at store.lds.org and online at saints.lds.org, and in the Gospel Library app.

Lead image from the video above