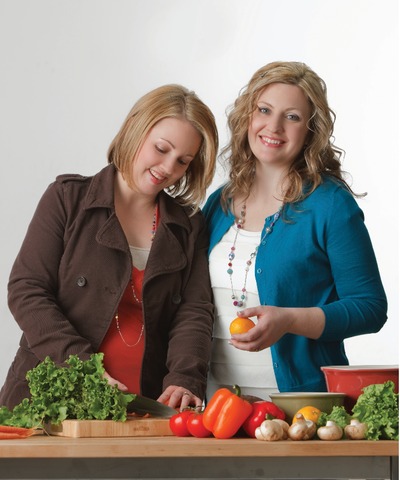 “A little light sour cream still doesn’t derail your healthy eating (unlike those Reese’s Peanut Butter Minis, but let’s not talk about them).”

That’s what you’ll find at Kate Jones and Sara Wells’s food blog ourbestbites.com. You’ll also find that the recipes listed above (and most others) can be made in less than an hour.

In an age of growing epicuriosity, Kate and Sara’s recipes bridge the divide between convenience and gourmet—the dead zone that keeps most of us self-proclaimed “busy people” from cooking and enjoying our own delicious food. Their hope is to make good food accessible, a feat they manage by incorporating more familiar ingredients and techniques and making the process transparent with step-by-step pictures—all on a budget.

“We once got an e-mail from a woman who said she thought she hated cooking, but after finding us she realized she was just using the wrong recipes the whole time,” says Sara.

Just as appealing as their simplified process is the personality and background Kate and Sara use to make their goal—home-cooked meals for everyone—realistic. They woo readers with anecdotes and conversational entries, and as they allude to the lives they lead as young, busy mothers, Kate and Sara make the impossible seem possible.

“Everybody is busy,” says Kate. “We’ve both got demanding callings, we’ve got little kids, we’re working, and there are other moms who are working full-time—it’s a different environment than our moms and grandmas grew up in.”

“A lot of people think there’s no time to fit cooking into that,” adds Sara. “We want to show people that good, fresh, family-friendly food is not that hard, and it can fit into your life. A lot of [people] say, ‘I don’t have time to make homemade food like that every night.’ And we say, ‘You can! We’ll show you.’”

Behind all the fun they have inventing recipes, taking pictures, bantering with readers, and, of course, eating is an obvious passion for creating good food. They love the process so much that they can’t keep the passion to themselves—they’re addicted to sharing it, encouraging it, even trying to make it grow in places where it was previously absent.

And they’ve obviously hit on something, because even though there are an estimated 33,000 food blogs out there, their reader base continues to grow, and new people fall in love with their approach every day.

More than Food
A love of food seems to be the most basic explanation for why they and so many others enjoy manipulating such a basic necessity of life (and why readers love reading about it so much). But food seems too elementary to cause such a hubbub. So, why do people love food? Why does it feed our souls as much as our bodies?

“I feel like it’s one of those basic needs— and there’s more to that need than just physically eating,” says Kate. “It’s a really emotional experience. I think so many people are drawn to food memories from when they were younger because of the kind of love and acceptance that it evokes in their memories.”

Both Kate and Sara have felt that connection distinctly because of the unique relationships they have with their mothers. Kate’s mom died when she was just 9 years old, and Sara’s mom is currently suffering from the advanced stages of multiple sclerosis, which includes an inability to cook and significant memory loss.

Due to her mom’s memory loss, including the very earliest times in Sara’s life, Sara relies mostly on her own memories, and food is one way she can tap into that reserve. “I love when I bite into something like the peanut butter and jam bars she used to make when I was young and my mind is flooded with thoughts, feelings, and memories. That’s the power of food, and it’s a sweet, sweet taste.”

Kate also recalls times when food brought back meaningful memories. Her mom made roast every Sunday before she died. Sometime after she passed, Kate says, “My dad was making a roast and my sister walked in, and the smell of the roast was just overwhelming with memories. Those smells take you back to another place in your life.”

Part of the reason Kate and Sara feel so strongly about the power of food is because their families adhered to a strict family mealtime. Cooking and eating brought their families together and allowed them time to be close.

“What I learned from years of family dinners,” says Sara, “is the kitchen is where people connect. That’s where as a child I felt loved, and safe, and taken care of. It’s where we talked about our days, our friends, our jobs, and our lives.”

Bringing It Home
Memories of good food shared in a loving atmosphere have made Kate and Sara hungry to create similar experiences for their own children.

“At the very heart of everything is our families,” says Kate simply.

Very often the two of them will post nostalgic recipes from their childhoods, and all of the recipes posted to the site have been tried and tested by their families (which is why, in addition to recipes for fancy pasta salad and crab dip on their site, you’ll also find recipes for “slime” and “monster jaws”).

Additionally, the two of them try to incorporate their children in the cooking process as much as they can, believing, as Sara says, “that it’s an important part of being a family—it creates a sense of bonding and togetherness.” That doesn’t mean the kids always like it (and Kate’s daughter is particularly persnickety), but they find that family time in the kitchen and at the table means just as much to the kids as it does to them.

“I hope that they have that same sense of consistency from family meals that I was able to take away,” says Kate. “I think they need to know that, even if things are crazy, every single night, there’s one thing that’s going to stay the same: being able to sit down together, and pray together, and talk about your day—the good things and the bad things—and laugh.”

Sharing the Love
With their new book, they’re reaching (and increasing) that community in new ways. Not only does the legitimacy of print help them reach a new audience, but they made a bold titling decision in publishing: though they have never made an explicit mention of their religion on the blog, the subtitle to their book is Mormon Moms in the Kitchen.

“It was scary—especially for me,” says Kate, who lives in Louisiana—the “deep” Bible Belt, as she calls it. “We didn’t know if it would be ostracizing to people who weren’t members of the Church—were people here going to want to carry it?”

It was a decision they weighed carefully, but ultimately they decided it could make a difference for the better. “We thought it was a good opportunity to shed light on what a modern LDS woman really represents,” says Sara. “Our beliefs play a huge role in who we are as women and what we try to communicate through blogging. There are so many misconceptions in the media, and we wanted to show the world that a modern Mormon mom is just that— bright, capable, creative, and engaging. And it’s not all about Jell-o and casseroles!”

“It’s been a cool missionary tool, and it’s opened a lot of doors,” says Kate. “We were nervous—we were really nervous—but everyone’s been super supportive of it.”

As their site has grown and moved forward, they have only realized more how much their families play a part in what they do. “At the heart of it,” they say, “we are just two moms trying to make it work every day, which is something that keeps both us and our blog very real.”

“We’re just like other women trying to balance church, and school, and jobs, and family,” says Sara. “We have unfolded laundry piles, and dirty kitchens, and for every night of beautifully styled dinners we eat, there’s at least a couple nights of chicken nuggets and boxed macaroni and cheese.”

But amid the unfolded laundry and dirty kitchens, they look forward with hope that their children will learn self sufficiency and understanding from this experience. Sara specifically sees how it can teach her boys a deeper understanding for motherhood. “I hope they grow up seeing that a mother has many roles, that they will respect and honor that in the women that will come into their lives,” she says.

*This is an excerpt from "Cook, Pray, Love." To read the full article and for delicious recipes, see the LDS Living magazine March/April 2011 issue.