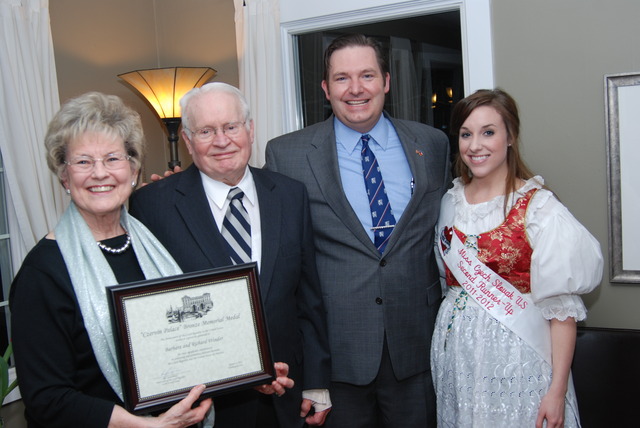 Richard and Barbara Winder, residents of South Jordan, Utah, have just become the first Utahns to receive the Czernin Palace Award. This highly prestigious award is given by the Czech Republic to a person or group that has contributed significantly to positive relations between the United States and the Czech Republic, and after more than 50 years of interaction with the Czech Republic, the Winders received the award in recognition of their efforts.

The Winders enjoyed a special ceremony to receive the award at the home of their friend, James McConkie, on February 20.

The story of the Winders’ involvement with the Czech Republic extends over half a century ago, before the country shifted to communism in 1948 and while it was still named Czechoslovakia. Just prior to 1950, Richard Winder served a mission to Czechoslovakia under Wallace Toronto, the mission president at the time. Unfortunately, Nazi occupation of the country forced the evacuation of all missionaries, and Richard returned home to Utah. Shortly thereafter, he met Barbara Woodhead, and two-and-a-half weeks later, they were engaged. (Aside from being a wife and a mother of four children, Barbara went on to become General Relief Society President in 1984.)

Under the direction of the First Presidency, Richard and Barbara remained in contact with the members of the Church in Czechoslovakia during the decades of communism, which spanned from 1948 to 1989. Jonathon Tichy, Honorary Consul of the Czech Republic in Utah and former missionary to the Czech Republic under Richard Winder, said, “They went over . . . and met with members in their homes to try and check on them and . . . set the stage for the day the Church would be able to return to the country.”

Finally,  a year after the communist government was officially ended, the First Presidency called the Winders to reestablish the Church in the country and reopen the Czechoslovakia Prague Mission. After so many years of being cut off from direction from Salt Lake City, members of the Church were not easy to find.

“When the Winders returned in 1990, they were able to locate roughly 150-200 members remaining from 40 years of communism. There had been a couple of baptisms, but roughly they started with 200 people,” said Tichy.

The Winders had their work cut out for them, not only because of the shortage of active members, but also because of the predominant atheistic beliefs of the country. A poll conducted by the United States in 2001 showed that 52 percent of the Czech population identified as atheist, and current polls on atheism frequently show the Czech Republic as one of the most atheistic countries in the world.

However, the country’s distaste toward religion has not stopped the progress of the Church in the Czech Republic. In fact, the 200 members in 1990 have expanded to a number reaching nearly 2,600. Tichy remarked, “They don’t sound like huge numbers, but you figure that’s ten times more in twenty years, and if it was ten times more in another twenty years, that would be remarkable. It shows good progress.”

After serving as mission president for three years, Richard was released and called as a patriarch. He would spend the next several years traveling from Utah to the Czech Republic for a week at a time to give patriarchal blessings, and he and his wife’s interest in the country did not go unnoticed. In May 2010, the Czech ambassador came to visit Utah and meet the Winders. Tichy recalled, “The Winders made a very positive impression on the Czech ambassador…and he walked away very impressed. As they looked further into what the Winders had done all these years, the Czech Republic realized these people were very deserving of this recognition.”