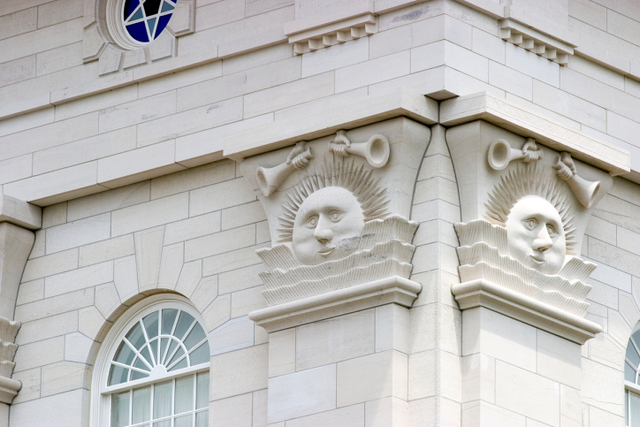 INTRODUCTION: Over the past several years I have witnessed the dedication of several temples. I suspect that many of you have also. I have a painting in my office that shows fifty-five temples. And we are not done yet. Brigham Young expressed an interesting insight about this in a talk given many years ago.

I have determined, by the help of the Lord and this people, to build Him a house. You may ask, "Will He dwell in it?" He may do just as He pleases; it is not my prerogative to dictate to the Lord. But we will build Him a house, that if He pleases to pay us a visit, He may have a place to dwell in, or if He should send any of His servants, we may have suitable accommodations for them. I have built myself a house, and the most of you have done the same, and now shall we not build the Lord a house? (Journal of Discourses, Vol.1, p.376, Brigham Young, December 16, 1851)

In this lesson we will discuss The Lord’s instructions to his Saints to make a place where he could dwell among them, and some of his reasons for those instructions.

1. THE LORD COMMANDED THE SAINTS TO BUILD THE KIRTLAND TEMPLE.

That revelation was given in December of 1832. In June of the following year, just six months later, the Lord said, “For ye have sinned against me a very grievous sin, in that ye have not considered the great commandment in all things, that I have given unto you concerning the building of mine house . . .” (D&C 95:3).

Consider the implications of this rebuke. If you wait six months to start this house, it will take six months longer to finish. Clearly, six additional months without the blessings of a temple would be costly to the saints—and their delay in preparing for these blessings was a “grievous sin.” Reflect on the longest time you have gone without a visit to the temple when there was a temple available. How many blessings have we missed because of our delays in seeking the blessings that come from being in the Lord’s House?

2. THE SAINTS WERE BLESSED FOR THEIR GREAT SACRIFICES IN BUILDING THE TEMPLE.

When Joseph Smith dedicated the Kirtland Temple, he reminded the Lord of what it had cost the church to build this temple.

For thou knowest that we have done this work through great tribulation; and out of our poverty we have given of our substance to build a house to thy name, that the Son of Man might have a place to manifest himself to his people. (D&C 109:5)

Our literature abounds with accounts of the sacrifice and suffering associated with the building of the Kirtland Temple.

After these things had been introduced, the people in Kirtland, Ohio, by the command of God, through Joseph Smith, the Prophet, some 49 years ago, (without being particular as to dates) commenced to build a house unto the Lord wherein certain preliminary ordinances were introduced, and that house was built under very trying circumstances to the Saints, but they accomplished it. Most of the Saints then devoted all the time they could possibly spare for the accomplishment of that object; it was not in little donations, but they had to exert their undivided energies and means to its accomplishment. When they had finished it, it was dedicated to the Lord, God accepted their sacrifice, and Jesus appeared in that Temple, of which appearance you will find a description in the Book of Doctrine and Covenants (Section 110). (Journal of Discourses, Vol.25, p.179, John Taylor, May 18th, 1884)

Once again these historical experiences suggest significant lessons for us. What kind of sacrifices ought we be willing to make to have the blessings of the temple in our lives? The women of Kirtland ground up their china to make temple walls sparkle; the Kirtland men left farms and businesses to drive nails and erect walls; the youth carried mortar and clearing brush. All these suggest to us that we too ought to be sacrificing in order to obtain temple blessings.

Wherever you are, ask yourself what sacrifices the Lord expects of you with regard to His houses. Are you satisfied that He is satisfied? Should you be doing more than you have done or are doing? All of our lives need balance and there are things other than temple service that require our best efforts, to which we must give attention and time, but temple activity is one thing we must not neglect. And the increase in the number of temples in the world increases our responsibility.

D&C 109 is the dedicatory prayer for the Kirtland Temple. It was given by revelation to Joseph, and offered by him on March 27, 1836. Reflect on the following from Pres. Joseph Fielding Smith, Jr.:

When we dedicate a house to the Lord, what we really do is dedicate ourselves to the Lord's service, with a covenant that we shall use the house in the way He intends that it shall be used... Dedicatory prayers for temples, however, are formal and long and cover many matters of doctrine and petition. This pattern was set by the Prophet Joseph Smith in the dedication of the Kirtland Temple. The prayer given on that occasion was revealed to him by the Lord; all prayers used since then have been written by the spirit of inspiration and have been read by such of the Brethren as have been appointed to do so. (Church News, Feb. 12, 1972)

The dedicatory prayer for the Kirtland Temple can be organized in the following manner:

The dedicatory services lasted seven hours—hours filled with manifestations of the glory and approval of God. In these manifestations we see continuing evidence of the purpose and power of temple work, and of the Lord’s approval of our efforts to build and utilize his House.

God was there, his angels were there, the Holy Ghost was in the midst of the people, the visions of the Almighty were opened to the minds of the servants of the living God; the veil was taken from the minds of many; they saw the heavens opened; they beheld the angels of God; they heard the voice of the Lord; and they were filled from the crown of their heads to the soles of their feet with the power and inspiration of the Holy Ghost. . . . In that Temple, set apart by the servants of God, and dedicated by a prayer that was written by inspiration, the people were blessed as they never had been blessed for generations and generations. (Orson Pratt: JD, vol. 18, p. 132)

In D&C 95:8 the Lord promised that he would endow his chosen people with power in the new temple. “Yea, verily I say unto you, I gave unto you a commandment that you should build a house, in the which house I design to endow those whom I have chosen with power from on high . . .”

D&C 110 is the revelatory record of the fulfillment of that promise. Review the description of the Lord given in 110:2-3. Then ponder the things He said to Joseph and Oliver at this time (see 110:5-10). In verse 5, the Lord forgives sins. Did you know that He forgives sins 22 times in the Doctrine and Covenants? What does that teach you about His character? What dos the Lord promise to do in the temple? (see 110:7,8) Compare this promise with D&C 97:16.

Following the appearance of the Savior, three other messengers appeared with keys. They are in fact the keys to three of the missions of the Church: to proclaim the gospel, to perfect the Saints, and to redeem those that have passed on.

Which of those keys did Moses bring? We have often talked about the return of the ten tribes. Who has the keys to lead them? (The president of the Church) Those keys came with the keys for missionary work—the gathering of Israel.

5.TEMPLE BUILDING AND TEMPLE WORK ACCELERATE IN OUR DAY.

The Church has made temple blessings more easily available with the passing years. In 1995, President Hinckley said, “I have a burning desire that a temple be located within reasonable access to Latter day Saints throughout the world” (Gordon B. Hinckley, “Of Missions, Temples, and Stewardship,” Ensign, Nov. 1995, 52-3).

A short time later, while prayerfully pondering this matter, he learned a way to make such “reasonable access” possible.

But there are many areas of the Church that are remote, where the membership is small and not likely to grow very much in the near future. Are those who live in these places to be denied forever the blessings of the temple ordinances? While visiting such an area a few months ago, we prayerfully pondered this question. The answer, we believe, came bright and clear.

We will construct small temples in some of these areas, buildings with all of the facilities to administer all of the ordinances. They would be built to temple standards, which are much higher than meetinghouse standards. They would accommodate baptisms for the dead, the endowment service, sealings, and all other ordinances to be had in the Lord’s house for both the living and the dead. (Gordon B. Hinckley, “Some Thoughts on Temples, Retention of Converts, and Missionary Service,” Ensign, Nov. 1997, 49)

President Hinckley’s prophetic emphasis on the building of temples across the world reminds me of a prophecy from President Kimball in 1973, when there were only 15 functioning temples in the world.

The day is coming soon when no one will need to die without a temple marriage . . . The day will come when there will be hundreds of temples all over this world, when there will not be one soul in the world, probably, who is more than a thousand miles away; and for a one time experience in all one's life, a thousand miles is not far to go. It wouldn't be far to crawl if one knew what he was getting and what he was missing if he didn't go. (“Marriage is Honorable,” BYU Speeches of the Year, 1973; p. 269)

CONCLUSION: Brigham Young was teaching the Saints on March 3, 1861. The foundation of the Salt Lake Temple had been buried at the approach of Johnston’s army, but it was now time to uncover it and renew efforts to build that Temple. But Brother Brigham warned what would happen:

If you wish this Temple built, go to work and do all you can this season. Some say, “I do not like to do it, for we never began to build a Temple without the bells of hell beginning to ring.” I want to hear them ring again. All the tribes of hell will be on the move, if we uncover the walls of this Temple . . . We completed a temple in Kirtland and in Nauvoo; and did not the bells of hell toll all the time we were building them? They did, every week and every day. (JD, Vol. VIII, pp. 355-356)

What a glorious cacophony of bells must be ringing now! Perhaps it is the most beautiful sound in all creation.