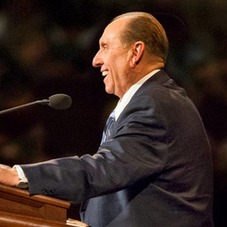 INTRODUCTION: One of the great realities of the Restoration is the fact there is now communication between this planet and the eternal worlds. Beginning with the vision in the grove and continuing on through the years to this very day, we see evidence of continuous communication between God and his children. We have seen it in the unfolding of the revelations in the D&C and in the unfolding of the latter-day organization of the Kingdom of God on earth. President James E. Faust said:

For many years, I have watched the process of continuous revelation which emanates from God through the keys, authority, and under direction of the President of the Church. I testify that this revelatory power has directed this work since April 6, 1830. That confirmation is the source of the greatest knowledge I have. I counsel and pray that all will heed the ongoing prophetic voice of this Church, revealing the word of God in our day” (James E. Faust, “The Prophetic Voice,” Ensign, May 1996, 7).

Elder Boyd K. Packer presented a powerful example of a way in which the prophetic presence in the Church has been a blessing to the members:

The ultimate purpose of the adversary, who has “great wrath, because he knoweth that he hath but a short time,” is to disrupt, disturb, and destroy the home and the family. Like a ship without a rudder, without a compass, we drift from the family values which have anchored us in the past. Now we are caught in a current so strong that unless we correct our course, civilization as we know it will surely be wrecked to pieces. . . .

This crisis of the family is no surprise to the Church. We have certainly known what was coming. I know of no better testimony that we are led by prophets than our preparation for this present emergency. (Boyd K. Packer, “The Father and the Family,” Ensign, May 1994, pp.19-20).

What is priesthood correlation? It is that system of Church administration in which we take all of the programs of the Church, wrap them in one package, operate them as one program, and involve all the members of the Church in that operation. It is a system which requires us to operate within the existing framework of the Church. The day is long since past in which we discover some problem and set up a committee or some other organization to solve it. Instead we use the revealed priesthood organization, which means that we use home teachers in the way set forth in section 20, and we correlate all priesthood and auxiliary operations through the ward priesthood executive committee and the ward correlation council. President Harold B. Lee defined priesthood correlation as simply “putting the priesthood where the Lord put it and helping the family to function the way it should function” (See “Correlation and Priesthood Genealogy” in Genealogical Devotional Addresses, 1968, Provo, Utah, Brigham Young University Press, 1969, p. 55; Bruce R. McConkie, “Only an Elder,” Ensign, June 1975, pp. 66-7).

This revealed effort of the Church to focus—to correlate—its organizations and capacities to accomplish the work of the Restoration more effectively has had a discernible influence in all of our lives. Only consider the impact of such things as the current emphasis on the family, the organization of Church auxiliaries, the Church publications, and home teaching, and you will begin to comprehend what the correlation program has meant for the welfare of the Church.

2. REVELATION EXTENDING THE BLESSINGS OF THE PRIESTHOOD TO EVERY WORTHY MALE MEMBER OF THE CHURCH

Official Declaration #2 is worth a careful look. It constitutes one of the most dramatic revelations given in this dispensation. Please read it and ponder on the manner by which the revelation came and by which it was approved by the Quorum of the Twelve.

The earnest supplications of the brethren for the faithful long denied these priesthood blessings are now a matter of divine record. The response of the Lord to those petitions is now a matter of revelation. It is impossible to calculate the impact of this revelation on both sides of the veil. What a flood of rejoicing must have filled the courts on high when the vote was taken and the matter became a part of Church doctrine!

One member’s story illustrates how important the priesthood is for each of us and our families and how grateful we might be for the opportunity to receive it. Joseph William Billy Johnson of Cape Coast, Ghana, first received literature about The Church of Jesus Christ of Latter‑day Saints in 1964. He knew that the Church doctrines he read in it were true, and he immediately began teaching them to his family, friends, and anyone else who would listen to him. It was not until four years later that he was able to obtain a copy of the Book of Mormon, to carefully read and pray about it, and to receive a witness of its truth. In letters to Salt Lake City, he had asked for more information about the Church and for missionaries to come to Africa to teach and baptize him. President McKay sent him literature and told him it was not yet time for missionaries to come to his country but that he should continue to study and have faith.

For 14 years Billy Johnson devoted himself to teaching the everlasting gospel and meeting with informal groups of believers. While strengthened by many spiritual experiences, he and members of these groups became discouraged when their pleadings for missionaries were not answered quickly.

During a particularly difficult period, Billy returned home one day much discouraged. As he struggled to obtain comfort and counsel from the Lord, he felt impressed to turn on his shortwave radio and find the BBC news broadcast. He was finally able to tune in the BBC at midnight. He recalls:

3. PUBLICATION OF NEW LATTER-DAY SAINT EDITIONS OF THE SCRIPTURES

It is significant that the Lord’s appointed leaders of his Church have produced and published the Church’s own edition of the Bible. Because of the influence of continuing revelation, we are able to present to the world the most useful Bible on the planet—a Bible that incorporates references to all of the standard works.

The prophet Ezekiel prophesied this: “The word of the Lord came unto me, saying, Moreover, thou son of man, take thee one stick, and write upon it, For Judah, and for the children of Israel his companions: then take another stick, and write upon it, For Joseph, the stick of Ephraim, and for all of the house of Israel his companions: And join them one to another into one stick; and they shall become one in thine hand” (Ezek. 37:15-17).

The stick or record of Judah—the Bible—and the stick or record of Ephraim—the Book of Mormon, Another Testament of Jesus Christ—are now woven together in such a way that as you read one, you are drawn to the other; as you learn from one, you are enlightened by the other. They are indeed one in our hands. Ezekiel’s prophecy stands fulfilled (Boyd K. Packer, “Using the New Scriptures,” Ensign, Dec. 1985, 52).

The impact of these new editions will be felt in the Church for generations to come. In an earlier sermon on this matter, Elder Packer said:

With the passing of years, these scriptures will produce successive generations of faithful Christians who know the Lord Jesus Christ and are disposed to obey His will.

The older generation has been raised without them, but there is another generation growing up. The revelations will be opened to them as to no other in the history of the world. Into their hands now are placed the sticks of Joseph and of Judah. They will develop a gospel scholarship beyond that which their forebears could achieve. They will have the testimony that Jesus is the Christ and be competent to proclaim Him and to defend Him (Boyd K. Packer, “Scriptures,” Ensign, Nov. 1982, 53).

4. ADDITIONAL QUORUMS OF THE SEVENTY

What are the duties of the Seventy? In D&C, we read, “The Seventy are also called to preach the gospel, and to be especial witnesses unto the Gentiles and in all the world—thus differing from other officers in the Church in the duties of their calling. (D&C 107:25). And, “The Seventy are to act in the name of the Lord, under the direction of the Twelve or the traveling high council, in building up the Church and regulating all the affairs of the same in all nations, first unto the Gentiles and then to the Jews . . .” (D&C 107:34).

The inspired direction that came as the Seventy assumed their divinely directed role in the leadership of the Church is further evidence of the revelatory nature of our religion. When the Lord spoke through President Kimball in 1975 and the First Quorum of Seventy was organized, I began to see more clearly how the Lord wants his Church to be organized. In 1989, a Second Quorum was added. Then in 1997, three more quorums were added to serve as Area Authority Seventies.

President Spencer W. Kimball from this very pulpit bore his testimony when he said: “I say, in the deepest of humility, but also by the power and force of a burning testimony in my soul, that from the prophet of the Restoration to the prophet of our own year, the communication line is unbroken, the authority is continuous, and light, brilliant and penetrating, continues to shine. The sound of the voice of the Lord is a continuous melody and a thunderous appeal.” (Ensign, May 1977, p. 78; cited in L. Aldin Porter, “The Spirit of Prophecy,” Ensign, Nov. 1996, p. 10)

I pray we will all be devoted listeners to that continuous melody, and that the thunderous appeal of revelation from the Heavens will shape us into Christ-like beings worthy of exaltation.