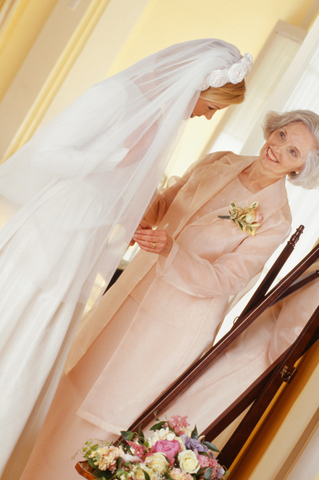 My girlfriend and I recently got engaged, and our parents are contributing financially to the wedding. We’ve noticed that both sets of parents are pressing their ideas of what they’d like the wedding to be like, who to invite and who to include in the wedding party. I know in the end it’s our call, but traditionally do parents have some kind of say if they contribute money to help pay for the wedding?

No. Traditionally, they take a say. And traditionally they’re a pain in the behind! But they only interfere because they’re so excited and love you so much. They want to be part of the happiness and for everything to be perfect.

As soon as they deliver a little girl, lots of mothers start planning their daughters’ wedding. They’ve had several years to dream and form an opinion on this, and your fiancé’s mom has probably been doing it, too.

Since this is such an emotional event, I think you two need to have some reasonable boundaries. But you also should keep in mind that your parents are just as excited – if not more – than you guys are. When you come to a disagreement tell them firmly, but gently, that you love them, but you’re going to do things your way. If they’re footing part of the bill they’d have the right to decide not to pay for something, but unless there’s some moral issue involved they probably won’t act badly.

I think if you just step back and take a breath you’ll realize what a big deal this is to everyone involved. Chances are you’ll also be able to come up with some creative ways to allow them to participate without your wedding losing its identity.

My biggest suggestion to you is to make sure that you’re the buffer between your fiancé and the parents. Don’t let anyone push her around, and do everything you can to make sure your wedding is what you both want it to be!