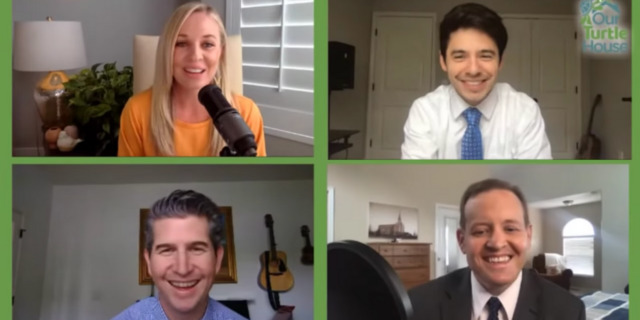 David Archuleta and Others Share How to Be “In the World, but Not of the World” in Digital Fireside

The date is December 19, 2011. David Archuleta has been rising in popularity since his 2008 appearance on the seventh season of American Idol. On this Monday night, Archuleta performs at Abravanel Hall in Salt Lake City, announcing to the audience that he is going to put his career on hold to serve a mission for The Church of Jesus Christ of Latter-day Saints.

In a recent digital fireside by Our Turtle House,  the pop singer shared the wrestle that went into making this decision. Archuleta was joined by authors Anthony Sweat and Hank Smith, and the fireside was hosted by fellow American Idol alumna, Carmen Herbert. All three speakers focused their remarks on the theme of being in the world, but not of the world.

As part of his remarks, Archuleta shared his experience deciding to serve a mission. He explained how he had parties advocating for both decisions. On the one hand, he had the people in the music industry who had bolstered his career. On the other, he had his Church leaders encouraging him to be an example for other youth.

“You have to separate yourself and say, ‘What do I need?’ And the second that I said, ‘What do I need for my own well-being and my relationship with God?’ that’s what it came down to,” Archuleta said.

Sweat, who teaches at Brigham Young University, discussed one way we can be in the world but not of the world is to embrace the three great gifts of faith, hope, and charity. Referencing Ether 12:28, Sweat explained how faith, hope, and charity bring “the fountain of all righteousness” into one's life. Speaking of charity, Sweat said, “When we experience how much God loves us, we automatically start to love God’s children with the same type of love. I like to use this math formula: Love of Christ + Love for Christ = Love like Christ.”

Smith, who also teaches at BYU, shared how one way we can be in the world but not of the world is by fostering optimism. He shared the example of his late friend, Kris Belcher. Belcher was no stranger to hardship as she suffered through illness in her life, including blindness. He shared a quote from one of her books, Hard Times and Holy Places:

“Don’t allow your heart to be hardened by hard times; make the choice to turn to Christ. There is a purpose in your suffering. You and I are being changed, remodeled, stretched and polished for eternal glory.”

► You may also like: In Memory of Kris Belcher: Your “One Holy Thing”

“She left a legacy for me, to choose happiness, to choose laughter in all this difficulty,” Smith said. “I think that’s part of being in the world but not of the world, is not being pessimistic, not being cynical.”