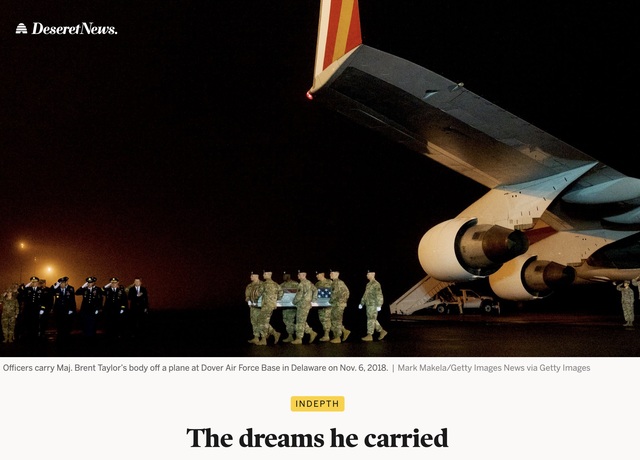 The wall of Maj. Brent Taylor’s quarters in northern Iraq looked much like his living space when serving a mission to Brazil, Deseret Magazine reports. He decorated both with photos of his family, cutouts from religious magazines, and inspirational quotes.

“My choice of decorations was very different from my men,” he once wrote, describing himself as “a straight-leg Mormon and not ashamed of it.”

In keeping with that statement, he often struggled to sleep after hearing some of the tales his comrades exchanged.

“My ears were burning,” he wrote. “Profanities and dirty language are as routine in the military as food and water.”

Some encouraged Taylor to participate.

► You may also like: "I'm Not Raising My Children Alone”: How Jennie Taylor Has Found Peace after Her Husband Was Killed in Afghanistan

“Sometimes you’ve got to drop a few f-bombs,” his staff sergeant told him.

But Taylor knew why he was there. While others went there to fight the bad guys, Taylor is remembered as someone who went overseas “to build relationships and try to make it a better place.” He loved the people in Afghanistan, the same way he had loved the people of Brazil on his mission.

In a beautifully written piece in Deseret Magazine, writer Chad Nielsen recalls the key moments in Maj. Brent Taylor’s life prior to his passing in 2018, as well as what made him a true American hero. Read more here.