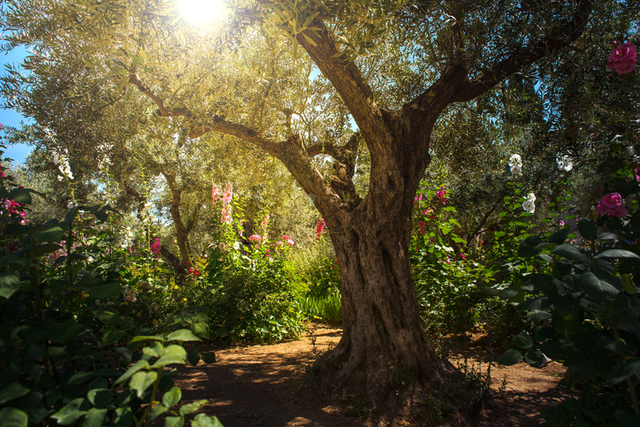 We begin where almost everyone begins—with the name. As all know, the name means “olive press” and derives from Hebrew. The place lay on the slopes of the Mount of Olives, on the east side of the Kidron Valley, opposite the city of Jerusalem, which sat on the west side of that valley (Matthew 26:36; Mark 14:32; Luke 22:39). It likely had a wall around it for it was called “a garden” (John 18:1). The name “olive press” points to the place’s essential character, a parcel of ground that grew olive trees and therefore must have had a working press. Archaeology does not disappoint. Though we do not know the exact location of this garden, very near this area was a cave that shows evidence of having been used for olive oil extraction and for the storage of tools.1 Occasionally, the cave may also have served as a sleeping place for Jesus and His disciples (Luke 21:37; John 8:1).

A person may ask what the place of an olive press had to do with Jesus coming here and, during the hours of that fateful night, beginning to suffer. Asked another way, does the meaning of Gethsemane exhibit an inner connection with Jesus’s Atonement? On one level, it was as if He had walked into a press, for He bled as if being squeezed, as the scriptures say, from “every pore” (Mosiah 3:7; D&C 19:18). But olive oil is a golden color. So where is the symbolism in that? In response, we notice that when olive oil is freshly pressed, it is not golden. It is red, like blood.2 In fact, in my observation, the oil’s red color stains the stone parts of the press and only disappears with the winter sun and rains.

The area of Gethsemane must have been rather big, with a large number of olive trees to make it worthwhile to harvest the fruit. After all, Jerusalem was a major olive growing center, producing a lot of goods, such as lamp oil, cooking oil, cosmetics, soap, unguents, and an oil garnish for foods. Beneath the trees, one could see across the garden. Certainly, that was the case for the three disciples who accompanied Jesus into the enclosed area. In the light of the full moon of Passover, they could see Jesus moving around. And move He did, as we shall soon see.

The traditional Gethsemane features an impressive Catholic Church building called the Church of All Nations. Its interior is kept dark like the night that Jesus came to Gethsemane. The images of the Savior in the three sanctuaries at the front of the church picture Him wearing red clothing, almost as if He had bled into His garments or He was fulfilling Isaiah’s expectation of One who is “red in [His] apparel” and has “trodden the winepress alone” (Isaiah 63:2–3). A person reads in one of the sanctuaries the line from Luke 22:44 (in Latin) to the effect that Jesus’s “sweat was as it were great drops of blood falling down to the ground.” The grounds outside the church are graced by exceptionally old olive trees that are hundreds of years old. Were they standing during the night of Jesus’s suffering? Likely not because, when the Roman army arrived at Jerusalem in AD 68 to begin the siege of the city, soldiers cut down all trees near the city walls to construct their siege engines and battering rams.

As we all know, Jesus arrived at Gethsemane in the late evening with His eleven disciples. He evidently positioned eight at the entry into the garden, taking Peter, James, and John with him into the interior. There He asked them to watch and pray while He went farther. Because of the full moon, they could see Him easily. At this moment, all our sins and pains descended on this innocent man so that He “began to be sore amazed, and to be very heavy.” We can almost hear Him as He turned to the three and, in extreme agony, whispered, “My soul is exceeding sorrowful unto death” (Mark 14:33–34). Even though He had steeled Himself for this moment, it appears that its intensity surprised even Him and His first thought was to get out of it, even considering yielding up His life (“sorrowful unto death”), for He had been given power over life (John 1:4; 5:26).

It is plain that it took Jesus a while to wrestle His initial impulses into submission. The English text says simply that “he went forward a little, and fell on the ground, and prayed” (Mark 14:35), almost as if those simple acts settled His heart and allowed Him to go on. But the underlying text is richer and more suggestive than that. What we meet here are imperfect tenses of the Greek verb. The verb translated “he went forward” is a participle, but it is governed by the following imperfect verbs “fell . . . and prayed.” In Greek, imperfect verbs spell out some action that is ongoing or repeated—for instance, “she was running” or “he kept swinging.” In Mark 14:35 and the matching passages in Matthew and Luke, the imperfect verbs bear an iterative sense, the sense of repeated action. In this light, what we should see in our mind’s eye is what the three disciples could see. Jesus was struggling forward, falling, and praying; then stumbling forward, falling, and praying; then lurching forward, falling, and praying. It was as in the case of an athlete who, in the extremity of competition, tries to adjust the body so that the pain eases, even if a tiny bit.

How long was He in this state of agony, of extreme suffering? The Gospel accounts do not give clear clues. But the Joseph Smith Translation offers some help. We must recall that Jesus and the twelve had just shared the Passover meal together, with Judas slipping out. That meal was to begin after sundown, the only meal that is set in time. Typically, the main meal of the day fell during the early afternoon. But not the Passover. After the Passover feast and the singing of the Hallel psalms (Psalms 113–118), about 10:30 or 11:00, Jesus and the disciples walked out of the city and, crossing the Kidron streambed, stepped to the gates of the garden. As we know, the disciples fell asleep during Jesus’s struggles. Here is where the JST adds some clarity. We read, “And after they had finished their sleep, he [Jesus] said, Rise up, let us go.” The last five words appear in Mark 14:42. But the idea that the disciples had slept their customary length of time is added by the JST (also JST Matthew 26:43). A person can figure this out in large measure. Jesus was in Gethsemane before midnight and the arresting party arrived between four and five o’clock. The point is that Jesus was suffering for us in the garden for four to six hours, not for one or two.    One other coloration is important to notice. It has to do with Jesus’s words to the disciples when He first came back to them and found then sleeping: “Watch ye and pray, lest ye enter into temptation. The spirit truly is ready, but the flesh is weak” (Mark 14:38). Each one of these lines is full of meaning for Jesus. He had just been facing the biggest temptation of His life—to release His life in the face of tremendous anguish and pain. He knew, like He had never known before, that His spirit was indeed ready but that His flesh was weak. And He also knew that the way out of the temptation which had confronted him was through prayer.3 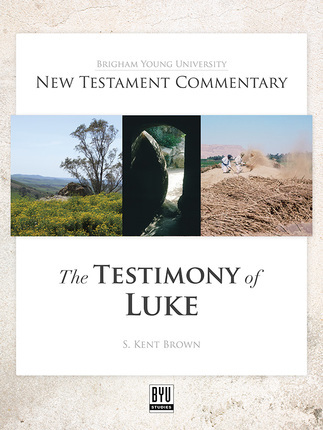