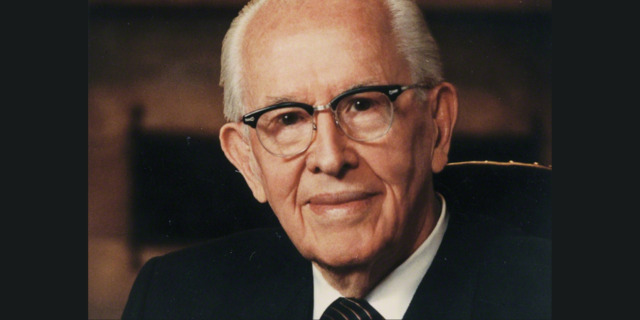 ‘A special witness’: A look at President Benson's testimony of the resurrected Christ

Editor’s note: The following excerpt comes from a book about special witnesses of Jesus Christ. You can read this chapter in its entirety at truthwillprevail.xyz as well as other chapters as they are posted. This excerpt is republished here with permission.

In 1979 President Ezra Taft Benson gave (at least) two addresses to gatherings of Latter-day Saints in which he used similar and carefully phrased wording to indicate that he had beheld the Lord Jesus Christ, and probably also handled His resurrected body.1 The first was given on December 9 to students attending the institute near the University of Utah. On this occasion he shared this sublime witness: “I say, the Resurrection of Jesus Christ is the greatest historical event in the world to date. In this dispensation, commencing with the Prophet Joseph Smith, the witnesses are legion. As one of those called as a special witness, I add my testimony to those of my fellow Apostles: He lives! He lives with a resurrected body. There is no truth or fact of which I am more assured, or know better by personal experience, than the truth of the literal Resurrection of our Lord.”2

This declaration was followed by another one like it (but perhaps even more clear) shortly thereafter, given to a gathering of saints in California: “Because He was God—even the Son of God—he alone had the power of resurrection. And so on the third day following His burial, He came forth from the tomb alive and showed Himself to many. There were witnesses then who saw Him. There have been many in this dispensation who have seen Him. As one of those special witnesses so called in this day, I testify to you that He lives. He lives with a resurrected body. There is no truth or fact of which I am more assured or more confident than the truth of the literal resurrection of our Lord.”3

► You may also like: ‘I am giving my life for the Church’: Elder Holland shares his testimony in new video

Other declarations of testimony uttered by Brother Benson during these years before he became the President of the Church: “Jesus lives today. He is risen. This I know. . . . Yes, Jesus Christ is divine. He lives today. He was resurrected. He is the Son of God, the Redeemer of the world.”4  Again:

Now there remains but one thing more for me to do today, and that is to bear my personal testimony.

I know that God lives, that he is a personal being, the Father of our spirits, and that he loves his children and hears and answers their righteous prayers. I know that it is his will that his children be happy. It is his desire to bless us all. I know that Jesus Christ is the Son of God, our Elder Brother, the very Creator and Redeemer of the world. I know that God has again established his kingdom on the earth in fulfillment of prophecy and that it will never be overcome, but it shall ultimately hold universal dominion in the earth and Jesus Christ shall reign as its King forever.

I know that God in his goodness has again revealed himself from the heavens and that Joseph Smith was called of God to reestablish that kingdom—The Church of Jesus Christ of Latter-day Saints. I testify that he accomplished this work, that he laid the foundations and that he committed to the Church the keys and powers to continue the great Latter-day work, which he began under the direction of Almighty God.

I know that Joseph Smith, although slain as a martyr to the truth, still lives and that as head of this dispensation—the greatest of all gospel dispensations—he will continue so to stand throughout the eternities to come. He is a prophet of God, a seer, and a revelator, as are his successors. I know that the inspiration of the Lord is directing the Church today because I have felt of its power. I know that the First Presidency and other General Authorities of the Church have as their object and purpose the glory of God and the exaltation of his children. And finally, I know that no person who does not receive this work can be saved in the celestial kingdom of God and escape the condemnation of the Judge of us all.

Humbly and prayerfully I leave this testimony, knowing full well I must eventually meet my Maker and stand with all men before the judgment bar of God. More than anything else in all the world, I am grateful for this testimony of the divinity of this great latter-day work and exhort all men everywhere to give heed thereto, . . .5

And again: “I bear witness to you, my beloved brethren and sisters, that God lives. He is not dead. I bear testimony that God our Father and His Beloved Son, our Savior and Redeemer, did in very deed appear to Joseph Smith. I know this as I know that I live. I testify there is a God in heaven who hears and answers prayer. I know this to be true.”6

The following declaration of testimony, given to an audience at Brigham Young University, also contained a strong warning to scholars and academics who question and doubt or seek to deny the reality of the First Vision:

He lives today; of that I bear solemn witness. This same Jesus has already come to earth in our day. The resurrected Christ—glorified, exalted, the God of this world under the Father—appeared to the boy Joseph Smith in 1820. This same Jesus—the God of Abraham, Isaac, and Jacob, the God of Moses, the Creator of this earth—has come in our day. He was introduced by the Father to Joseph Smith with these words: “This is My Beloved Son. Hear Him!” (Joseph Smith 2:17 [JS—H 1:17]). There are some in our midst who sponsor the sophistry that this appearance of God the Father and his Son, Jesus Christ, was not literal, that it was probably a product of the Prophet’s imaginings. That is an absolute falsehood. It is not only an attempt to discredit the testimony of Joseph Smith; it would discredit the testimony of Jesus himself who literally appeared to the Prophet as a witness of His own resurrection.7

In the 1980s, President Benson gave some conference addresses that were specifically chosen as opportunities to bear witness of Jesus and hint at sacred spiritual experiences he had received that granted him sure knowledge; brief but powerful excerpts follow:

“To possess a testimony of Jesus is to know that He voluntarily took upon Himself the sins of all mankind in the Garden of Gethsemane, which caused Him to suffer in both body and spirit and to bleed from every pore. All this He did so that we would not have to suffer if we would repent. (See Doctrine & Covenants 19:16, 18.)

“To possess a testimony of Jesus is to know that He came forth triumphantly from the grave with a physical, resurrected body. And because He lives, so shall all mankind.

“To possess a testimony of Jesus is to know that God the Father and Jesus Christ did indeed appear to the Prophet Joseph Smith to establish a new dispensation of His gospel so that salvation may be preached to all nations before He comes.”8

“I bear testimony that this is the Church of Jesus Christ. He presides over it and is close to His servants.”9

“I humbly testify that He is the same loving, compassionate Lord today as when He walked the dusty roads of Palestine. He is close to His servants on this earth.”10

“I testify to you that God lives and that today He communicates to His servants His will.”11

“I know that the inspiration of the Lord is directing the Church today because I have felt of its power.”12

“The spirit world is not far away. Our work is all one great program on both sides of the veil. Sometimes the veil between this life and the life beyond becomes very thin. This I know! Our loved ones who have passed on are not far from us.”13

Read this chapter in its entirety at truthwillprevail.xyz.

1. For instance, to his Apostles, the resurrected Jesus said, “Behold my hands and my feet, that it is I myself: handle me, and see; for a spirit hath not flesh and bones, as ye see me have” (Luke 24:39).

2. Ezra Taft Benson, “Five Marks of the Divinity of Jesus Christ,” New Era, December 1980; Given as an LDSSA fireside address in the University of Utah Special Events Center on Sunday, December 9, 1979.