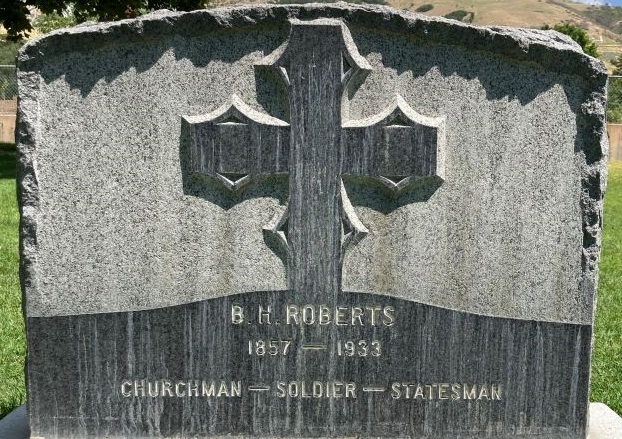 One hot afternoon, I was on a hill overlooking the border between Syria and Israel. My family had recently moved to Jerusalem, where I would be teaching for a year at the Brigham Young University Jerusalem Center, and I had traveled with some colleagues to prepare for a series of future field trips. As we walked down the hill, we talked about how some Latter-day Saints de-emphasize the importance of Christ’s Crucifixion. I didn’t know it then, but this conversation would launch me on a process of discovery that would forever change how I think—and feel—about the Savior’s Atonement. I want to share a few of the questions that I asked and sought to answer as part of this journey.

1. What do the scriptures and Church leaders teach about where Christ atoned for our sins?

My friend Anthony Sweat, who is also a professor at BYU, and I recently asked about 800 adult members of The Church of Jesus Christ of Latter-day Saints the following question: “Where would you say Jesus Christ mostly atoned for our sins?”

A. In the Garden of Gethsemane

B. On the cross at Calvary

C. Equally in Gethsemane and Calvary

Although the majority of people in this survey focused on Gethsemane, the scriptures and modern prophets more heavily emphasize Christ’s sacrifice on Calvary. While at least two powerful passages of scripture teach that Christ suffered for our sins in Gethsemane, more than 50 verses specifically link Christ’s death with our salvation.1 For example, at the beginning of the Book of Mormon, Nephi testified that Christ was “slain for the sins of the world,” and when Jesus appeared to the Nephites, He said, “My father sent me that I might be lifted up upon the cross . . . that I might draw all [people] unto me” (1 Nephi 11:33, 3 Nephi 27:14, emphasis added). Joseph Smith and modern Church leaders collectively have taught about the saving nature of Christ’s death much more frequently than they have His sufferings in Gethsemane. What is most significant to me is the Savior’s personal emphasis on Calvary. On one occasion, He directly speaks of what transpired in Gethsemane; in contrast, Christ personally refers to His death more than 20 times. In other words, He Himself emphasizes His Crucifixion. This doesn’t mean Gethsemane isn’t important; it does mean some of us will benefit from focusing more on Calvary than we have in the past.

The scriptures and Church leaders repeatedly teach that Heavenly Father and Jesus Christ manifested Their love for us through the Savior’s death. Paul declared, “God commendeth his love both toward us, in that, while we were yet sinners, Christ died for us” (Romans 5:8; see also 1 John 4:9–10.)

In addition to showing us God’s love, the Crucifixion demonstrates Christ’s personal love for each of us. Jesus taught, “Greater love hath no man than this, that a man lay down his life for his friends” (John 15:13). Notice that Jesus Christ Himself personally defined His Crucifixion as His greatest act of love. Some people shy away from Christ’s Crucifixion because they want to exclusively focus on “the living Christ.” We do believe in the living Christ—we also believe in the loving Christ, and Christ manifested His love to us on the cross. By more fully understanding the Savior’s death, we will increasingly feel His love and be able to share it with others.

► You may also like: The ultimate victory: How the death of Jesus Christ was a triumph, according to one BYU professor

If you were to ask a Church member why our churches don’t have crosses, they would likely say, “Because we worship the living Christ,” echoing a statement made by President Gordon B. Hinckley in 1975. While that is certainly true, there are additional factors to consider. First, from a historical perspective, when Joseph Smith organized the Church in 1830, Protestant churches didn’t use crosses in their architecture and Catholic churches were relatively scarce. In other words, Joseph Smith didn’t decide that the cross was bad; it just was not part of his cultural milieu. Crosses became a common feature in Christian churches in America between 1840 and 1870—a time period when the Church was largely isolated in Utah.

Nearly all Christians believe Christ died for our sins. For many, the cross represents their faith in Jesus Christ. If Latter-day Saints focus on the cross exclusively as a representation of a dying Christ, it can lead to hurt feelings—after all, symbols are multifaceted. Eric Huntsman, professor of ancient scripture at Brigham Young University, recounted the following story:

I remember being surprised once when a . . . Presbyterian friend corrected me when I told her that we preferred to worship a living rather than a dead Christ; she responded that she did too. The cross reminded Protestants that Jesus died for their sins, but it was empty because He was risen and was no longer there on it. I was chastened by her response, realizing that just as we do not appreciate others mischaracterizing our beliefs, neither should we presume to understand or misrepresent the beliefs and practices of others.2

In some instances, new converts or those learning about the Church are treated inappropriately when they wear or display a cross. A woman named Kendall shared the following story with me:

I was raised attending a Lutheran church. As with most Protestant churches, the cross was a central and revered symbol. When I was introduced to The Church of Jesus Christ of Latter-day Saints, I learned about the suffering Christ experienced in Gethsemane, which greatly added to my understanding of the Atonement of Jesus Christ.

I moved to Utah to attend BYU one week after being baptized. I regularly wore a necklace with a small cross pendant that my grandmother had given me. On campus, I had a few experiences where students . . . thought I was not a member, probably because of my necklace. One of my friends even asked me to stop wearing the necklace.

I know the Savior suffered for my sins in Gethsemane and on the cross. I have hesitated to share my thoughts and experiences about this, always wondering if my testimony of the Atonement of Jesus Christ is not enough because I have a different balance between both Gethsemane and His Crucifixion.

How tragic that Kendall questions if her testimony of the Atonement of Jesus Christ is enough because she cherishes both the Garden of Gethsemane and Christ’s Crucifixion. I’m grateful she has remained firm in her commitment to the Church of Jesus Christ but wonder how many visitors or recent converts have left because of unnecessary comments about the cross.

As we look at the history of the image of the cross, we see that over the centuries of Christianity, and even across the decades in the Church, the image of the cross has meant different things to different to people. The Apostle Paul wrote that he gloried “in the cross,” and said, “The preaching of the cross . . . is the power of God” (Galatians 6:14, 1 Corinthians 1:18). Today, some may choose to wear or display images of the cross or Crucifixion to remind themselves or teach their children of Christ’s love, shown through His atoning sacrifice. Others prefer to avoid images related to Christ’s death and instead focus on other symbols that remind them of the Savior’s Atonement. Either way, instead of judging the actions of others, we can all treasure the doctrine that Jesus Christ was, in His own words, “crucified for the sins of the world” (Doctrine and Covenants 53:2).

► You may also like: 5 things you never knew about the Christus statue

3. Is it bad to look at images of Christ’s Crucifixion?

When my children were younger, I sometimes flipped through the Gospel Art Book with them. One of my kids was always interested in the picture of Christ’s Crucifixion, but I felt uncomfortable with the image and would try to skip past it. I think many Latter-day Saints have a tendency to avoid the image of Christ on the cross.

I was surprised to learn that ancient prophets and the Savior himself have commanded us to contemplate this image. Mormon wrote to his son Moroni, “May [Christ’s] sufferings and death . . . rest in your mind forever” (Moroni 9:25, emphasis added). Similarly, Jacob wrote, “We would to God that we could persuade all [people to] . . .believe in Christ, and view his death, and suffer his cross” (Jacob 1:8, emphasis added).

These words from the Book of Mormon prophets become even more impactful when we consider what Jesus Christ has directly revealed in our day. In Doctrine and Covenants 6:36, the Savior says, “Look unto me in every thought; doubt not, fear not.” Immediately after telling us to look unto Him, Jesus commands, “Behold [meaning “fix your eyes upon”3], the wounds which pierced my side, and also the prints of the nails in my hands and feet” (Doctrine and Covenants 6:37). In our day, the living Christ has personally invited us to fix our eyes on His Crucifixion wounds.

This does not mean we need to constantly stare at pictures of the Savior’s death, but some of us will benefit from pondering such images. Seeing Christ on the cross may evoke feelings of sorrow for those who love Jesus; however, it can also bring feelings of peace, joy, and hope as we remember “the triumph and the glory of the Lamb, who was slain” (Doctrine and Covenants 76:39).

President James E. Faust taught, “Any increase in our understanding of [Christ’s] atoning sacrifice draws us closer to Him.”4 Better understanding any aspect of the Savior’s Atonement—including His Crucifixion—can deepen our relationship with Him. Our Redeemer’s gift from Golgotha, which He defined as His greatest act of love, is one that we can treasure in our hearts. 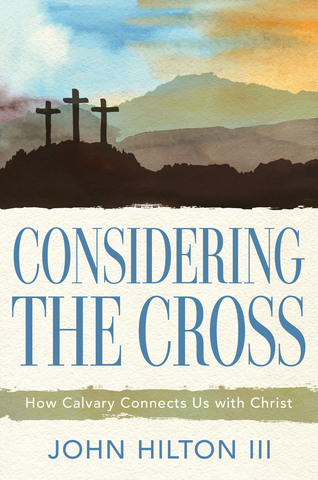 Read more about the place of the cross in Latter-day Saint beliefs and the power of Christ’s Crucifixion in Considering the Cross: How Calvary Connects Us with Christ, available at Deseret Book stores and at deseretbook.com. You can also find more information at johnhiltoniii.com/crucifixion or on Instagram: @TheLovingChrist and Facebook: @authorjohnhiltoniii.

John Hilton III was born in San Francisco and grew up in Seattle. He served a mission in Denver, and got a Bachelor’s degree from Brigham Young University. While there he met his wife Lani and they have six children. They have lived in Boise, Boston, Miami, Mexico, Jerusalem and China. Currently, they live in Utah. John has a Masters degree from Harvard and a Ph.D from BYU, both in Education. John is a Professor of Religious Education at BYU.

John has published several books with Deseret Book, including The Founder of our Peace. John enjoys speaking at Education Week, and at many other events.  His education research has influenced policy both in the United States and internationally. John loves being with his family, doing humanitarian work, learning Chinese, and performing magic.