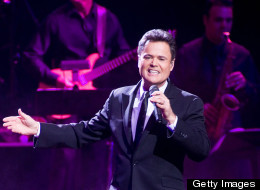 Donny Osmond is currently recording his 60th album and has launched the website Donny.com. And although one of the world's most famous Mormons has suddenly found his religion thrust center-stage with Mitt Romney's run for the presidency, the singer says he’s happy to stay out of the political spotlight.

“I’m a singer. Some people have those [political] aspirations. I don’t. I’m an entertainer. I get up on stage and I try to make people enjoy my music, and that political arena -- I'm going to stay out of it, right out,” Donny told me. “I’m glad some people like it, but it's just not for me. My political ideas and things like that, even my religion, I try to keep close to me because it’s a personal thing, and I don’t shove it down people's throats. I don’t condemn any artist that wants to do that, like the Baldwins. That’s their choice. But in my world, I'm just an entertainer.”