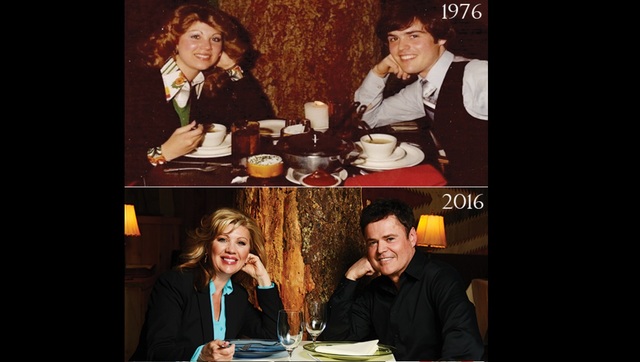 What a priceless photo from Utah Valley 360! Did you know that when Donny first met Debbie, she was actually on a date with his brother? To make matters worse, Debbie turned Donny down when he first asked her out. Learn more about Donny and Debbie's epic love story with "5 Famous Mormons and Their Unbelievable Love Stories."

On Debbie’s 17th birthday, Donny planned an elaborate birthday dinner and scavenger hunt, which began at the Tree Room. This was to be the night of their first kiss — and the snapping of the first memorable picture in their young relationship. Exactly 40 years later, Donny and Debbie met Utah Valley Magazine at Sundance to re-create this scene on Debbie’s 57th birthday.

Their first kiss … in Donny’s words

Debbie was playing hard to get, and I wanted to plan something really, really special for our first kiss. I told her a limo would show up at her house at a certain time, and then we were headed to Sundance for dinner.

My brother Wayne just “happened” to be at the restaurant at the same time and said that he just bought a camera and wanted to take a picture of us.