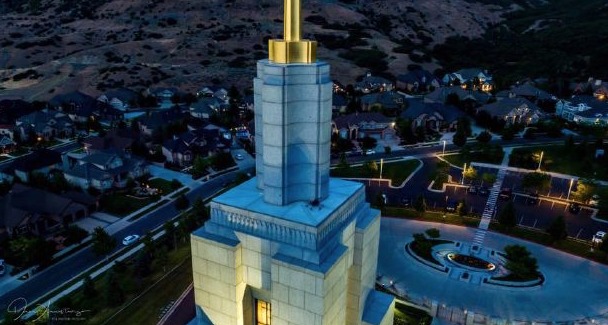 "Temples and the grounds that surround them are sacred spaces for worship and reflection, and so we try to preserve an atmosphere of tranquility and peace. For this reason, drone filming is very rarely authorized," said Church spokeswoman Irene Caso.

A drone stuck near the top of the LDS temple in Draper has put a tiny spotlight on the intersection of drone pilots, private entities, cities and the federal government.

Drew Armstrong often flies drones — or unmanned aerial vehicles — on the outskirts of temple grounds to photograph LDS temples. He said he was flying near the perimeter of the Draper Utah Temple grounds on June 26, when someone who identified himself as the temple's site manager approached him. The man asked him to fly over and get a visual of where a drone was stuck near the top of the temple's steeple, Armstrong said. It is presumed that the drone, which has been sitting near the top of the temple for weeks, had crashed.

Temple DroneTemple,Drone,
Comments and feedback can be sent to feedback@ldsliving.com