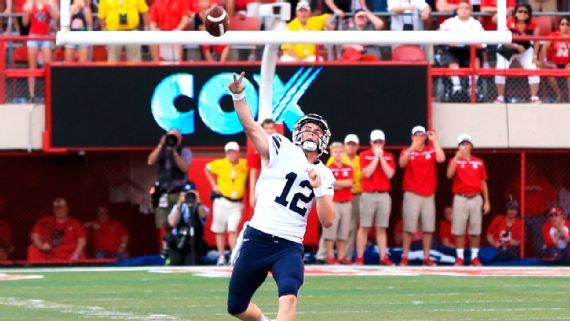 MR says: A 42-yard Hail Mary with one second to go? No wonder BYU's quarterback has caught the eye of ESPN. But that's not the only reason they're highlighting this unlikely hero.

Tanner Mangum returned to Idaho on the first Wednesday of June after spending 22 months as a missionary in the Antofagasta region of Chile.

Four days later, he left his parents' home northwest of Boise on a new mission -- to play quarterback at Brigham Young.

You may see these two journeys as unrelated, but they are inseparable to Mangum. A true freshman who turned 22 on Tuesday, Mangum will make his first start for the Cougars on Saturday at LaVell Edwards Stadium against his hometown school, Boise State, fulfilling a dream he has kept half his life.

A season-ending foot injury suffered by senior Taysom Hill pressed Mangum into unexpected action last week in the second quarter of BYU's season opener at Nebraska. He responded with a 7-for-11 passing effort in the 33-28 BYU victory and led a 76-yard drive in the final 48 seconds, capped by a 42-yard Hail Mary on fourth down.

So unlikely was his starring role that Mangum's parents skipped his first college game to watch Tanner's brother, Idaho State senior Madison Mangum, snag a highlight-reel catch in the Bengals' win over Black Hills State. (The Mangum brothers were 1-2 in the SportsCenter Top 10 on Saturday.) Michael and Karen Mangum followed the BYU comeback on their phones before losing the broadcast during the last drive. They knew the result only as text messages began to bombard their phones -- and then a call arrived from Parker, the oldest Mangum sibling and an ex-Cougar.

Mangum attributes his poise under pressure to the life experience gained while serving his LDS church mission. It gave him the perspective, Mangum said, to execute smoothly away from home before nearly 90,000 in his college debut.

Compared to the harsh conditions of the Atacama Desert, Memorial Stadium was a breeze.

"We're going to win a lot of games with him," said receiver Mitch Mathews, who caught the game-winning pass.