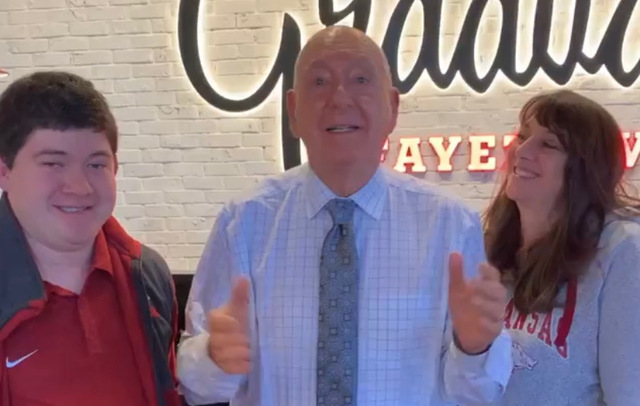 During one of the biggest college basketball games last weekend, renowned ESPN analyst Dick Vitale took a break from the action to give a shoutout to someone he ran into earlier in the day in a hotel lobby, McKay Gregson.

“He gained national publicity in 2014," Vitale said, "He’s a special needs youngster. They put him in the game on Senior Day at his high school. Prairie Grove High School right here in Arkansas. They put him in the game and McKay made a 3-point shot that really went viral. It was unreal. …Just a beautiful story and McKay is now helping coach at the elementary school in Prairie Grove and they call him ‘Coach McKay.’ His face lights up when they call him Coach McKay. Just a beautiful, beautiful story.”

Vitale also posted a video with Gregson and his mother, Gretchen, on social media.

The following story about McKay Gregson was originally written by LDS Living’s Morgan Jones and was published by the Deseret News in 2014. It is republished here with permission.

There were 6.7 seconds remaining on the game clock when McKay Gregson of Prairie Grove, Arkansas, checked in at the scorer’s table. McKay’s parents had been told that the coach planned to put him in at the end of the final game of his senior season on Feb. 14, 2014, but with his team down at the end of a rivalry game against Farmington High School, putting the manager with special needs into the game completely slipped the Prairie Grove High School coach’s mind. A cheerleader ran over to the coach, Steve Edminston, to remind him as fans from both sides began chanting, “Put in McKay.” The coach immediately called for McKay and put him in the game.

McKay's parents had seen videos of people with disabilities who are miraculously given a moment to shine, but they didn't expect this to be one of those.

“I had seen the videos online of some of the other kids who have had things like that happen,” said Gretchen Gregson, McKay’s mother. “They would always just make me bawl because I always thought of McKay and thought, ‘What are the chances that he will ever have a moment like that in his life ever?’ ”

With such a short amount of time left in the game when McKay took the floor, Gretchen remembers thinking, “What can you do in six seconds?”

The point guard passed the ball to McKay, who immediately launched an NBA-range 3-pointer that bounced off the front of the rim and into the hands of Jeremy Mueller, a player on the opposing team.

“When he took the first shot and missed, I was like, ‘There goes his one moment. He won’t have time to do it,’” Gretchen Gregson said.

The natural reaction in this situation for an opposing team would have been to hang on to the ball and wait for time to expire, but without a moment's hesitation, Mueller turned and passed the ball right back to McKay, who then launched a second 3-point attempt with 1.2 seconds on the clock.

“I don’t want to take away from anything you see in similar stories, but the one thing that was so different about this is that it wasn’t planned,” said McKay's father, Lynn Gregson, who can be heard in the video doing the live commentary for the webcast of the game. “It was planned for him to go in, but to get him a shot, the players just did that.”

McKay’s shot flew through the air, into the hoop and through the net. The basket was good. The crowd erupted, and it didn’t matter which team someone had come to the game to cheer on. For a moment, everyone was on “Team McKay.”

McKay’s younger sister, Marie, who was just one grade behind McKay in school, says she has always known how much people loved McKay, but in that moment, everyone knew.

“It was really cool for me because I know the love that people have for him,” Marie said. “I got to see people and how they interact with him in the hallways and how they just gave him this special care, and some friends of mine from the other school were the ones that started chanting to put McKay in. So that was really cool to see how his light, his example and his special qualities shine to people who I didn’t even know really supported him that much.” 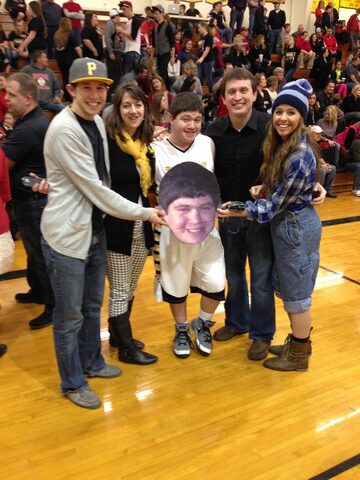 McKay’s older sister, Haili, explained that she and her two other siblings have each had opportunities to shine, but they never imagined that McKay’s moment would come in such an incredible way.

“We always thought, ‘We’ll help McKay do what we can,’ ” Haili said. “But to have something happen that was totally not anticipated or something that anyone planned for, I feel like it was just one of those miracle moments.”

McKay Gregson, 19, grew up, like most little brothers, with a desire to do everything his older brother, Ty, did. Ty loved sports, so McKay loved sports, even wearing various sports jerseys every day for years. With a little practice, many younger brothers are eventually able to do most of the things their older brothers do. But McKay has 22q11 deletion syndrome (“a disorder caused by the deletion of a small piece of chromosome 22,” according to the U.S. National Library of Medicine’s website), which keeps him from being able to do many of the things he would like to do. The disorder can result in a number of symptoms, but for McKay, it has caused autism spectrum disorders and psychiatric disorders such as obsessive-compulsive disorder and anxiety, along with other physical challenges.

During a conversation with his mom, Ty commented that he would be willing to do anything to help McKay achieve his dream of serving a mission for The Church of Jesus Christ of Latter-day Saints. With little hope of this dream becoming a reality, Gretchen mentioned Ty’s willingness to help McKay to their stake president, who immediately took the idea and ran with it. Within six months, McKay received approval from the LDS Church to serve a three-month, full-time mission in the Oklahoma Tulsa Mission if Ty would go with him. In 2014, the two were able to serve as mission companions from June to August.

Ty, a student at Brigham Young University, had served a two-year mission in the Florida Orlando Mission from 2010-2012. He expected the mission with McKay to be easier because he already had two years of practice. He soon found that his experience with McKay would be a whole new ballgame.

“It was hard for me going through and remembering, ‘OK, you might know how to do this now, but it goes back to logistics, and McKay can’t do that, so you need to put your pride, your ego aside and let McKay do his thing. He needs to shine. This is his mission, not your mission,’ ” Ty said. 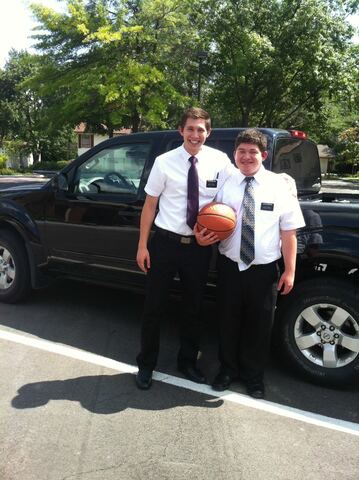 McKay explained that though his mission was challenging, he learned the truth of his favorite quote: “I can do hard things.”

“The first few days were really tough,” McKay said. “I didn’t know if I was going to make it. I was very sad and very homesick. I kept asking Ty, ‘Why am I going on a mission? Why am I doing this?’ But after I went through all of that, I told Ty, ‘Anything I can do, I want to do it.’ ”

Ty worked with the mission president to create a schedule that McKay could handle, which included shortened study periods, two naps and time each day devoted to sharing the gospel through social media platforms. While the brothers originally focused on social media simply because it was something McKay could do, it eventually evolved into something bigger. They created their own hashtag, #FaithInChrist, and asked people across the country to post photos of themselves holding up the hashtag. Each day, they posted pictures on Facebook of McKay and the experiences he was having as a missionary.

“They found a common denominator to reach out to people,” Lynn Gregson said. “I had a guy that I went to high school with following my boys on their mission. … So many people were following them, and that is what their mission was about. It wasn’t about knocking on doors or the typical things. It was about reaching an audience that only McKay could reach.”

When Ty left on his first mission, he chose a well-known scripture, Helaman 5:12, to motivate him during his two years of service. But for his mission with McKay, he chose a scripture that few people recognize by the reference alone. He selected John 9:1-3: “And as Jesus passed by, he saw a man which was blind from his birth. And his disciples asked him, saying, Master, who did sin, this man, or his parents, that he was born blind? Jesus answered, Neither hath this man sinned, nor his parents: but that the works of God should be made manifest in him.”

“I think that Ty always struggled with understanding why McKay has this disability, and he learned that it was so the glory of God may be manifest — and it was,” Lynn said. “It was the night of the shot. It was throughout their mission. … It’s not always about raising someone from the dead or healing the blind or curing someone of their illnesses, healing them. Sometimes God wants that because, as in John 9:1-3, his works ‘should be made manifest.’ ”

While McKay says Ty is an example to him, Ty says he feels that he was the one who was ultimately blessed by their missionary service together.

“In the experience we had together as missionaries and serving, constantly being there for each other, yes, I physically, literally helped him go through a mission, and he was able to grow spiritually,” Ty said. “But he blessed my life more than I could ever imagine.”

Read the rest of this story at Deseret.com