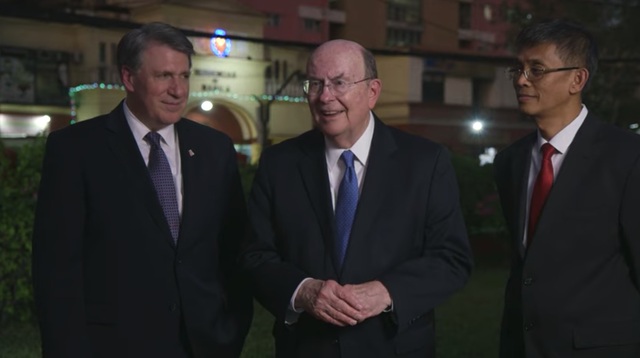 Rarely does an apostle happen to be in the area during the time of a natural disaster. But with the recent eruption of the Taal Volcano in the Philippines, Elder Quentin L. Cook of the Quorum of the Twelve Apostles has been able to minister to those affected by the volcanic eruption as well as meet with local leaders.

Elder Cook and his wife, Sister Mary Cook, arrived in the Philippines on assignment five days ago and have been ministering to members and meeting with officials in the area.

Topics discussed between Elder Cook and President Duterte included the impact of the recent explosion of the Taal Volcano and the efforts of The Church of Jesus Christ of Latter-day Saints to aid those who have been affected. Elder Cook noted that five Latter-day Saint meetinghouses are being used by those who have evacuated and are fleeing the effects of the volcano.

“He expressed gratitude for the history that he’s had in observing members of our Church step in [during] times of calamity or natural disaster,” said Elder Evan A. Schmutz, Philippines Area President, who accompanied Elder Cook on the visit to the president.

Elder Cook also presented Rolando Bautista, Department of Social Welfare and Development secretary, with a donation of $1 million pesos ($20,000 USD) to aid those affected by the volcanic eruption. Additionally, the Church has announced a humanitarian project fund of $5 million pesos ($100,000 USD) to provide 5,2000 food kits, 3,000 hygiene kits, 1,000 sleeping kits, and other supplies to those in need.

“Our people always support and sustain and pray for those who are leaders of nations, and we wanted him to know that our people did that,” Elder Cook said in the video.

Elder Cook also presented President Duterte with a leather-bound personalized copy of the Book of Mormon, which President Duterte expressed gratitude for and said he would read before he finished his term in office.

“I think that we will see a closer relationship not just with him, but with those who surround him,” Elder Cook said.

READ THE REST OF THE STORY ON CHURCH NEWSROOM PHILIPPINES.