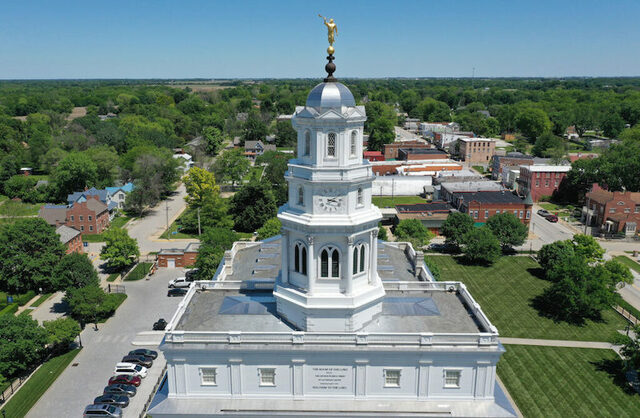 Elder Cook dedicated the Nauvoo Temple District last weekend. Here’s what that is and why it matters

On June 27, 2002, President Gordon B. Hinckley dedicated the rebuilt Nauvoo Illinois Temple on the anniversary of the Prophet Joseph Smith’s martyrdom. In his dedicatory prayer, President Hinckley prayed that the temple would “stand as a memorial to him who lived here and was buried here, Joseph Smith, the great prophet of this dispensation, and his brother Hyrum, whom he loved.”

Nearly 19 years later on Memorial Day weekend in Nauvoo, Illinois, the pioneers who built a temple on that historic site were remembered once again. On May 29, Elder Quentin L. Cook dedicated the Nauvoo Temple District—historic homes, landscapes, and buildings west of the Nauvoo temple—that highlights the legacy of those early pioneers. Church News reported that it was the first time since March 2020 that a member of the Quorum of the Twelve Apostles has served a public assignment.

According to Newsroom, the dedication was the first phase of the Church’s 25-year plan to improve the historic Nauvoo site by 2039, which marks the bicentennial of when the city was founded by Latter-day Saints. Elder Cook spoke about the following in his remarks:

The Apostle also dedicated the renovated Orson and Marinda Hyde home, which is not part of the temple district. It highlights Elder Hyde’s mission as well as apostolic missions of other Church leaders, Church News reported.

In his dedicatory prayer, Elder Cook expressed his appreciation for the lives of those early Saints who were so dedicated in building the temple and establishing the city of Nauvoo.

“We thank Thee for the rich legacy of the thousands of Saints who gathered here and settled Nauvoo,” he said. “We are grateful for the revelation Thou gave the Prophet Joseph that they should build a House unto Thee in this place. We marvel at their sacrifices and dedication over several years to prioritize the building of the temple. We are grateful for the faith and industry of these early Saints in establishing a ‘temple city,’ a place of refuge where holy temple ordinances were fully revealed to Thy children.”

In a Newsroom video, Jenny Lund, Church historic sites director, spoke about the purpose of the Historic Temple District. The project, she said, is in a way a follow up to the 2002 Nauvoo temple dedication and focuses on why the temple is there and why the pioneers constructed it.

“It became really clear that there was an important message missing in Nauvoo, and that was, ‘Why is this building here and why did these people construct it?’” she said.

Steven Olsen, senior curator of the Church History Department, also explained in the video how the buildings are connected to each other.

“Each one of the homes relate in some way or another to the temple—the design, construction, doctrine, and practice of the temple,” he said.

A Church News video highlights footage of the Nauvoo Illinois Temple. In the video, Elder Cook reflected on the doctrinal meaning of the temple and the 6,000 Latter-day Saints who received their endowment in Nauvoo. The early Saints sacrificed so much to get to Utah, and it wasn’t until 1877 that another temple would be dedicated.

“There is something about Nauvoo that just really touches my heart, so I am happy to be back,” said Elder Cook. “I love the history. I love the ancestors. I love the houses. I love everything about it. But the temple is really what gives it the meaning doctrinally and is special.”

The Historic Temple District is now open to on-site visitors. Learn more about the dedication and the sites at Church News and Newsroom.

► You may also like: Planning a trip to Nauvoo this summer? Here are 6 things you should know