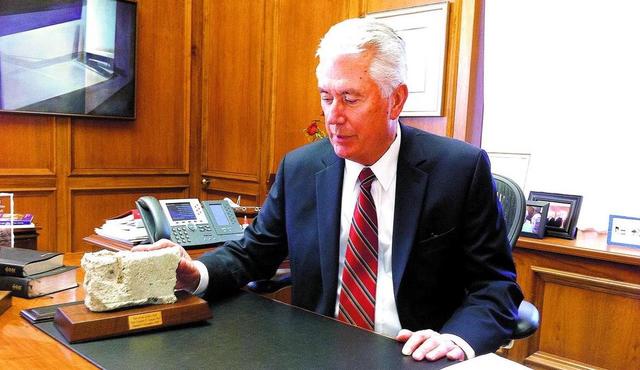 November 9, 1989, the day the Berlin wall came down,holds a special place in the hearts of people all over the world. And it is a day that Elder Dieter F. Uchtdorf celebrates each and every day, as a piece of the Berlin Wall sits in his office, according to a Facebook postfrom the member of the Quorum of the Twelve Apostles on Saturday. It is a day to remember something he calls a “great miracle.” This year, November 9 marks the 30thanniversary of the Berlin Wall coming down.

The Berlin Wall meant that “Latter-day Saints suffered for decades because their faith was seen as American. The Stasi, the East German secret police, infiltrated their meetings and tracked Mormon leaders, including visits by President David O. McKay and future church President Thomas S. Monson,” Deseret.com’s Tad Walch wrote in 2014. “Some left the Church when the government demanded it so they could attend college, find a better job, or get an apartment or car sooner. Church supplies were scarce.”

Despite these difficulties, there were also some miracles even with the wall in tact, including the building of the Freiberg Germany Temple and the 1988 allowance of missionaries into East Germany, which led to 650 baptisms in the first year of the Dresden Germany Mission’s existence.

But on November 9, 1989, in the midst of the Cold War, the wall came down unexpectedly and suddenly. Though the event was celebrated, it took time (11 months) for East and West Germany to agree on unity, which they did on October 3, 1990. So on October 3, Germany celebrates “Unity Day,” according to Elder Uchtdorf’s Facebook post.

“In the month that has passed since Unity Day, I have pondered about unity,” he wrote. “I remember back to 1989 when people from each side of the wall began to meet each other. We had similar dreams, aspirations, and hopes for our lives. Of course we had our differences too, but our intrinsic values and goals were similar. We found ways to focus on the similarities we had rather than the differences.”

In his post, Elder Uchtdorf explains that we have a need for this kind of unity in our relationships now, relationships that may have figurative walls around them. The Savior teaches us how to tear down these walls.

“We try to be more forgiving, more kind, more understanding, more supportive of each other,” Elder Uchtdorf writes. “If we make mistakes (and we will), we have the gift of repentance to fix our personal relationships and our relationship with God. Remember, because of the Savior’s sacrifice we can experience the miracle of unity in all the relationships we have in this life.”