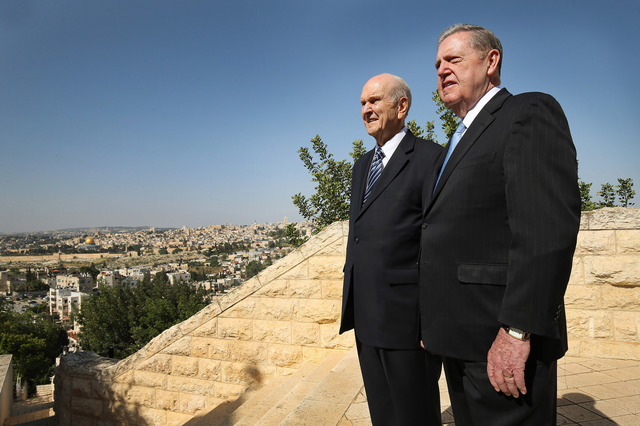 At 6:45 a.m. on Nov. 14, 1985, President Gordon B. Hinckley, chairman of the Executive Committee of the BYU Board of Trustees, received an urgent phone call from BYU President Jeffrey R. Holland.

President Holland had received a series of phone calls through the night about trouble in Jerusalem regarding the construction of the BYU Jerusalem Center for Near Eastern Studies. Tensions were high in Israel for a variety of reasons and talk of war was in the air.

Politically there was a 60-60 deadlock between two halves of a coalition in the Knesset, the Israeli parliament. A small political party had said it was willing to break the deadlock by giving its four votes in parliament to either competing prime minister and party who would “move the Mormons off Mount Scopus.”

It was a full year after the construction of the BYU Jerusalem Center had started. President Holland knew the very controversial center could be a factor in “bringing down the tenuous Israeli government.”

President Holland explained the situation to President Hinckley and desperately asked, “What do we do if we are a factor in an Israeli war with its neighbors?” President Hinckley took the issue to the temple meeting that was held with the First Presidency and Quorum of the Twelve Apostles in the Salt Lake Temple later that morning.