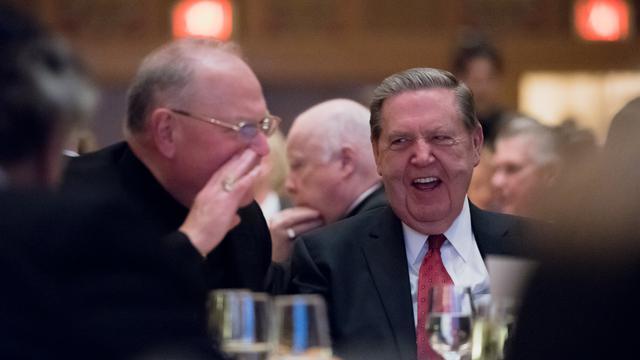 “I feel very much at home with you. And I think that's because you and the LDS family seem just to radiate a very sincere friendliness and hospitality that I've experienced,” Cardinal Dolan told Elder Jeffrey R. Holland. The Apostle gave the keynote address at a New York City event, presenting Cardinal Dolan with this special award.

His Eminence Timothy M. Cardinal Dolan, the Roman Catholic archbishop of the Archdiocese of New York City, was recognized Thursday at an interfaith event for his focus on issues involving faith, family and religious freedom. He was honored that day with the Visionary Leadership Award from the New York Latter-day Saint Professional Association.

“One of the reasons I jumped at this chance [when I got the invitation to attend the interfaith event],” said Cardinal Dolan, “[was that] I've been wanting to sit down with LDS leaders in this community.”
More than 450 people attended the interfaith event held at the landmark nondenominational Riverside Church in upper Manhattan. The honorary keynote speaker at the event was Elder Jeffrey R. Holland of the Quorum of the Twelve Apostles of The Church of Jesus Christ of Latter-day Saints. Both church leaders were greeted with standing ovations throughout the night.