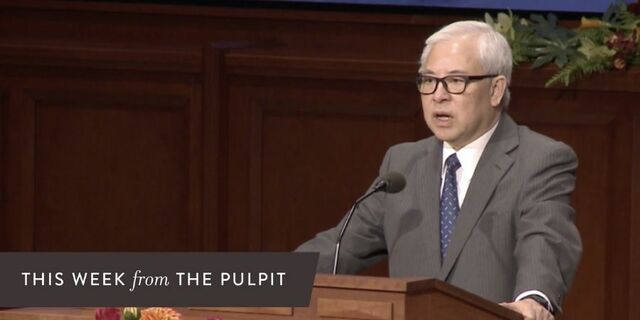 Editor’s note: “This Week from the Pulpit” highlights recent messages by General Authorities and General Officers of the Church.

Here’s a trivia question for you: what are three scripture stories that speak of stones (or rocks) and in which the referenced stones add up to a total of 22? Admittedly, there may be more than one right answer but while speaking at BYU–Idaho on Tuesday, April 27, Elder Chi Hong (Sam) Wong, a General Authority Seventy, told the stories of the brother of Jared (16 stones), David and Goliath (5 stones), and the rock of our Redeemer (one stone).

Elder Wong spoke of the Lord’s interest in giving the brother of Jared light on his journey to the promised land through his 16 stones. Shifting gears and speaking of David’s careful selection of five stones, Elder Wong asked, “If David knew God was on his side and only one stone was needed, why did he go through the trouble to choose five smooth stones?” He emphasized that by having five stones rather than just one, David was prepared for the future.

Finally, he spoke of the most important stone in any of our lives—“The foundation stone, our rock, our Savior, Jesus Christ.”

1.    Read each talk during the first month following conference

2.    During each of the five subsequent months, study one session per month

“Do you realize that all the teachings delivered in those five meetings are the best we could have for our time, especially for the next six months of our lives?” she asked.

Read or listen to the talks here.

Beginning by remembering a call to serve as bishop when he was a 24-year-old university student with two young children, Brother Milton Camargo, First Counselor in the Sunday School General Presidency and vice president of curriculum at BYU-Pathway, told students he has learned of the Lord’s ability to use even those who feel totally inadequate. He was called as a bishop for the second time 13 years later. And finally, he was called a third time four years later after just returning home from serving as a mission president. He found that his service as a mission president had opened his eyes to new ways to serve. “The calling hadn’t changed, but I had,” Brother Camargo said.

Likewise, he told the students that they would receive many calls to serve. “The Lord is counting on you to prepare now to fulfill the mission He has commissioned you to—to serve in His kingdom. And, as you study and prepare, He will send you again and again—and again,” he said.

In a piece for Church News, Elder Tad R. Callister shared an analogy to illustrate why we need heroes. He asked readers to imagine they are about to watch the Olympic high jump when the announcer comes over the loudspeaker to announce that the high jump pit has been removed. Instead, athletes are just asked to find an open space and jump as high as they can.

“The contestants are stunned and protest the decision but are told they don’t need a bar—that theoretically, they can jump just as high without it,” Elder Callister wrote.

He goes on to explain that just as the high jump bar “extracts every last bit of energy and strength a contestant has and thus lifts him or her to greater heights than otherwise possible,” heroes help us hold ourselves to a higher standard.

“They are concrete reality—the standard—the bar that lifts us to greater heights than otherwise possible on our own. More than a platitude—more than a moral principle—they constitute the real-life example of a man or woman who has ‘done it’ and thus possess the inherent power to unleash the divine potential within us, to lift us to new, even seemingly unattainable heights,” Elder Callister writes.

Read the rest of Elder Callister’s article at Church News.

My message to young adults, wherever you are, is do not underestimate what the Lord has ahead of you or what things you...

Earlier this month at general conference, I spoke about unfairness. Unfairness comes from living with bodies that are...Posted by Dale G. Renlund on Sunday, April 25, 2021

Like many of you, I miss going to the temple as before. I’ve missed my clean view of the Salt Lake Temple from the...Posted by Reyna I. Aburto on Friday, April 23, 2021