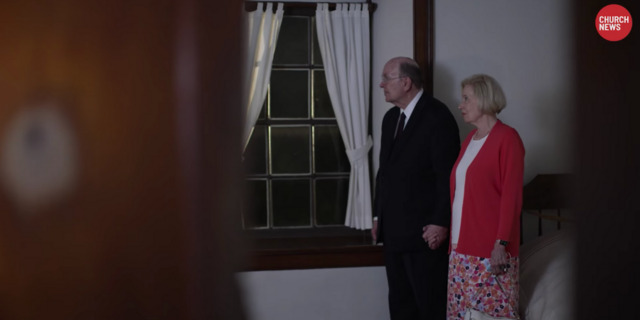 A video by Church News released the same week as the anniversary of the Prophet Joseph Smith’s death features Elder Quentin L. Cook and Sister Mary G. Cook sharing their thoughts on the Prophet’s martyrdom.

“I love the Prophet Joseph,” Sister Cook says. “When you think what he went through in the short amount of time he had here in mortality, what he did . . . his interaction with Hyrum and the fact that they were together in Carthage, and both gave their lives for this gospel of Jesus Christ.”

Elder Cook says Joseph Smith “completed his witness by making the sacrifice of his life.” He then adds his own testimony of the Savior.

“My faith and my testimony is in Jesus Christ,” Elder Cook shares. “I bear my solemn witness that Jesus Christ lives, that it’s the doctrine and the principles and the ordinances that He provided for us that will allow us to return to live with the Father and the Son.”

► Related content: What newspapers in the 1800s said about the martyrdom of Joseph and Hyrum

The video was filmed as part of Elder Cook’s trip earlier this year when he dedicated the Nauvoo Temple District, which consists of historic homes, landscapes, and buildings west of the Nauvoo temple. In the video, sister missionaries sing “A Poor Wayfaring Man of Grief,” the hymn sung by John Taylor in Carthage Jail the day of the Prophet Joseph's and Hyrum's martyrdom on June 27, 1844.