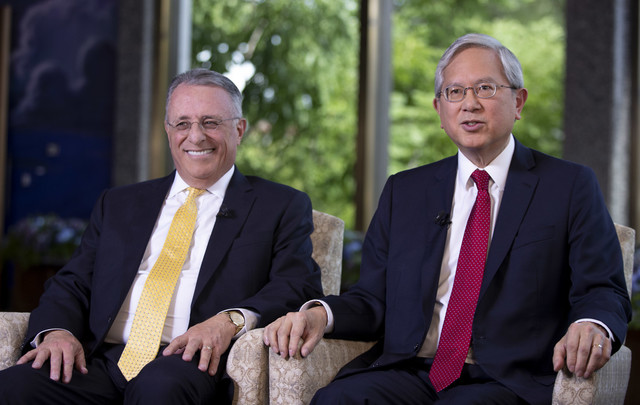 Elders Gong, Soares Speak to Media About Their First 3 months as LDS Apostles

"It's said that the Brethren are wonderful," Elder Gong said, "but they're even more wonderful when you see them in places where they are not otherwise seen. I think if there's anything I've felt, it's been that: The kindness, the authenticity, the great faith and testimony that you see in private that goes perhaps even beyond that which you see in public."

The young Mormon missionaries who walked out of the sweltering heat and into Temple Square's North Visitors Center on Thursday afternoon longingly told reporters they hoped to see the two men who were giving media interviews on the top floor.

That's part of the new normal for Elder Gerrit W. Gong and Elder Ulisses Soares, who have served nearly three months of what are expected to be lifetime roles as members of the Quorum of the Twelve Apostles of The Church of Jesus Christ of Latter-day Saints.

"I think our members have a very great love for those who have been called to the office in which we are now privileged to serve," Elder Gong said about how his life has changed since March 31, when LDS Church President Russell M. Nelson announced the two new apostles. "We are just so grateful to interact with them."