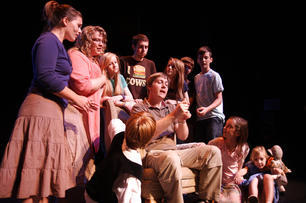 In a unique intercontinental mingling of talent and faith, the Cheltenham England Stake and the South Jordan Utah Glenmoor Stake are joining forces to present "Faith the Musical" at the LDS Conference Center Little Theater.

The production opens tonight at 7:30 p.m, with additional performances scheduled Friday and Saturday and again Aug. 9-13 at 7:30 p.m. each evening. There will also be a 2 p.m. matinee Saturday.

The musical is the brainchild of David R. Markham, who, as a member of the Cheltenham Stake high council, volunteered to write a musical to commemorate the stake's 25th anniversary in 2007. Markham drew in part from "Truth Will Prevail," a previous musical he had written in 1987 — just two years after he and his family joined the LDS Church — in observance of the 150th anniversary of the church in Great Britain.