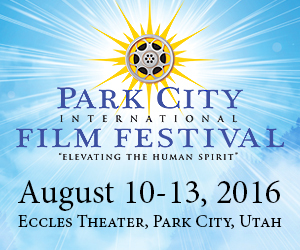 Film enthusiasts, celebrities, industry guests, and visiting filmmakers around the world will gather and mingle in a festival-friendly atmosphere at the first annual Park City International Film Festival. Held August 10–13 at the Eccles Theater in Park City, Utah, this is a first-year festival focusing on “elevating the human spirit."  Many LDS moviegoers will recognize two of the finalists in the narrative feature selection, The Cokeville Miracle and Just Let Go distributed by Excel Entertainment.

Families will enjoy the planned festivities, which include a worldwide movie premiere, gala concerts, clean comedy, and celebrity receptions. The festival will also feature panel discussions with world-renowned speakers and industry professionals. Topics will range from faith and family in films to films that improve humanity. This is going to be a film festival people of all ages will enjoy!

The festival will be screening feature films, documentaries, and short films each day starting at 10 a.m. and host family-friendly events in the main Eccles Theater each night. “We worked hard at creating a movie slate that would inspire and entertain,” shared Shelley Bingham Husk, Director of Programing. “The audiences are in for a delightful treat during the festival.”

Here is the schedule of events that your family will enjoy:

Friday, August 12 at 7:30 p.m. Chonda Pierce Live—You have seen Pierce on Comedy Central and her “Stand Up for Families” show on the Dove Channel.

Sponsored FilmSponsored,Film,
Comments and feedback can be sent to feedback@ldsliving.com