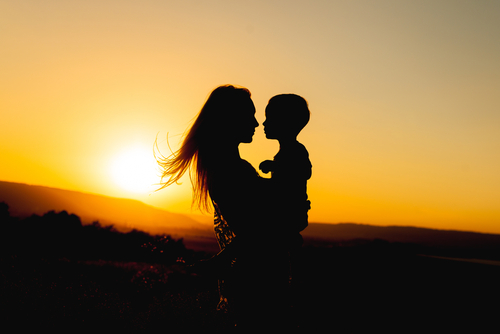 Eva Witesman: Is Mother's Day Only for Those Who Have Borne Children?

What does it mean that Eve was called the mother of all living before she had children—before, some suspect, she was even capable of having children? And what does this teach us about the divine role of motherhood?

As a young child, I loved to flip through my mother’s baby names book and read deep meaning into the names of my friends and family members. My mother’s first name means “star” and my father’s middle name means “who follows God,” just like mine. The meaning of my grandfather’s name is “peaceful warrior,” while my grandmother’s name means “universal wisdom.”

My name is Eva, after my mother. This means that, like Mother Eve, we were called the “mother of all living” long before either of us ever had children.

It was my grandmother who gave my mother the name Eva, before my parents passed it on to me. At first, I believed that all women were named for Eve like my mom and I were—that each of us shared the name “mother of all living.” My first experience in the temple—with my mother as my escort—only made me more connected to my personal role as a likeness of Eve. Later I would come to realize that this connection both with Eve and with the divine, eternal nature of motherhood, was a gift passed down through the generations of my family.

When I was little—and later when I was not so little—this same grandmother gave me gifts on Mother’s Day. When I would protest that I was not yet a mother, she would wave off my objections and gleefully watch as I unwrapped the package of socks (which was her idea of the perfect gift) or Red Vines licorice (which was my idea of the perfect gift). Depending on the year, she would alternately tell me “Mother’s Day is a day for all women,” or “you are a mother to your dolls” (which was somewhat disconcerting because I didn’t really play with dolls). Or she would just smile at me knowingly and say “someday.”

This “someday” was the most frustrating part of the whole situation. As a young child, the idea of marrying and having children seemed impossibly distant, remote, unfathomable. The events, actions, growth, and choices that would lead me on the path to marriage and children seemed tenuous. I thought that I was undeserving of my presents—although it didn’t stop me from enjoying them, I would often feel a pang of guilt before devouring the soft, sticky, red-chewy sweetness of the Red Vines.

As I have grown, I have gained more and more kinship with the namesake for whom my mother and I have been named. Like Eve, I have hungered for knowledge about the eternities and my role in them. Like Eve, I have faced complicated decisions and tried to make my way forward with each difficult choice. Like Eve, I have experienced both sorrow and conception (Genesis 3:16).

I frequently reflect on what I know and what I do not know about divine motherhood. I know that my purpose here is to learn, to live, to grow, and to try and become more like my Heavenly Parents so that someday, I too can be a creator in the eternities. I know that every commandment, every experience, and every trial can lead to that end.

The interwoven strands of priesthood and motherhood, of covenants, of the nature of spirits and life, and the elemental powers of the universe are concepts so vast that neither our science nor our faith has even begun to plumb their depths.

And yet I can feel rays of light reaching toward me from soul to eternal soul—teachings through prophets and apostles and the Holy Ghost that serve as welcome harbingers of restoration yet to come. I can feel that impending revelation like the warming spring sun on my upturned face. I know that I am “a beloved daughter of Heavenly Parents, with a divine nature and eternal destiny.” There is divinity and power in womanhood just as there is power in priesthood. As women, we invite men into the work of creation just as men invite women into the work of performing saving ordinances. In a 2014 conference talk, President Dallin H. Oaks partially quoted President Reuben J. Clark as he stated, “only to His daughters has God given the power ‘to be a creator of bodies . . . so that God’s design and the Great Plan might meet fruition.’”

It is imperative to understand that divine, eternal power is not constrained by mortality. The sealing power, which unites families forever, bridges the divide between mortal life and eternal life. Through our covenants, we begin to reach toward our own eternal destiny in the realms of our Heavenly Parents. There, we can hope to learn of other “keys that have not been given to man on the earth, including the keys of creation and resurrection” (President Dallin H. Oaks, “The Keys and Authority of the Priesthood,” Ensign, May 2014).

A woman’s identity as a mother is independent of whether her mortal body can bear, will bear, or has borne children. Sheri Dew said, “Motherhood is . . . the essence of who we are as women. It defines our very identity, our divine stature and nature, and the unique traits our Father gave us.” To be a mother is neither biology nor temperament, but an eternal, elemental, essential characteristic. As daughters of God, we have “a divine nature and destiny” with an “individual premortal, mortal, and eternal identity and purpose.”

I celebrate that characteristic even as I seek to understand it. I revere the holiness of motherhood, the majesty of it. I believe that the bearing and rearing of earthly children are types and shadows of the eternal nature of motherhood, but I do not believe that mortal experiences define or limit what motherhood is or will be. I also believe that the practice of developing a “mother heart” through covenant keeping and service, as Julie B. Beck described, has “changed the course of history and will continue to do so,” and the influence of righteous women “will spread and grow exponentially throughout the eternities.” All of the good we do on earth is another type and a shadow of eternal motherhood, a mere glimmer of what we can become.

I believe in the divine role of motherhood and the ways in which mortal motherhood and developing the mother heart can help lead us to that end. I also believe that the relationship between the divine nature of motherhood and the real, day-to-day experiences of women introduces paradoxes into our lives.  My grandmother’s gifts led me to ponder this as a child: As a woman, you are a mother in the eternal sense. And yet, as a woman, you often are not a mother in the mortal sense.

In October 2018 general conference, President Nelson said, “anytime I use the word mother, I am not talking only about women who have given birth or adopted children in this life. I am speaking about all of our Heavenly Parents’ adult daughters. Every woman is a mother by virtue of her eternal divine destiny.”

For many women, the path to motherhood does not include motherhood. Trying to make sense of this—that a person could be a mother by virtue of her divine destiny, but also not a mother in the literal, mortal sense of the word—can be jarring.

Personally, I have had an interesting track record with motherhood, though as my mom and others further down the road remind me, my journey as a parent has only just begun.

I have been pregnant six times. Three of these times, I experienced miscarriage or stillbirth. The other three times, I experienced the challenge of childbirth—one home birth and two C-sections. I am also an adoptive mother. I am now in the thick of parenting four children ranging in age from high school to preschool.

Being an adoptive mother is a joy and a privilege.  At the same time, I am frequently faced with the reality that—though I am sealed to my beloved adopted daughter in the temple and we can be together in the eternities, though I am her mother in every sense on a daily basis, and I have always loved her and always will—I am not her birth mother. Her birth mother has a special place in my daughter’s life and in our family. It is a place that I cannot fill.

I am also facing the end of my childbearing years. Every woman, whether she has borne children or not, will come to a point in her mortal life when physically carrying children is no longer an option. For some women, biology or other circumstances in life prevent childbearing altogether. For other women, the childbearing years come—and then go.

Sometimes childbearing comes and goes in a calamitous tumult. In the United States, about one in four recognized pregnancies end in pregnancy loss. Approximately one in 10 American women experience infertility. And tens of thousands of women in the nation place their biological children for adoption. Even mothers who give birth sometimes experience what it feels like to not have the privilege of parenting in mortality.

I believe that for others, there are equally powerful lessons they will learn through experiences I will not have. In the same way that the forge of my blessings and afflictions is forming me in God’s hands, their refiner’s fires are forging powerful instruments of them. In particular, I have witnessed the powerful character of single women, single mothers, and childless women and how their experiences have shaped their character, worldview, scripture study, and their powerful relationships with our creator. They know things that as someone who has experienced marriage and childbearing, I cannot know in the same way. I honor their path to eternal motherhood. I believe that we need to witness the beauty of the refiner’s creations, no matter which forge he has used to shape us.

It is imperative that we honor the full range of female experiences and recognize that the deep divinity and experience of womanhood—of motherhood—is not limited to those with children.

I wish that every woman could feel the sense of cherished value my grandmother was trying to instill in me each Mother’s Day, and that her daughter, my mother, continues to build in me. And when I give gifts to my own daughters on Mother’s Day and see their faces—contorted in confusion about why they, too, should be celebrated—I will kneel down and look into their eyes and tell them to wear those socks with pride, and to enjoy their licorice. I’ll tell them to celebrate their potential even though it may seem hidden from view. I’ll tell them to feel the sunlight of revelation on their faces and live up fully to their covenants. Because the best is yet to come.

After receiving her bachelor’s degree from the University of Utah in 2002, Eva Witesman wanted to continue on to graduate school but was torn between her desires to further her education and to focus on motherhood. Following a prompting, she continued her education and received her MPA from Indiana University in 2004. After a hiatus—during which her husband, Owen, interned in Finland—she continued her education at IU and received her PhD in public management and policy analysis.

Witesman, an expert in evidence-based innovation and strategy, became a full-time professor of public management at the BYU Marriott School of Business in 2009. She teaches graduate classes and coordinates student-driven projects like GoodMeasure - program assessment and evaluation for dozens of local nonprofits, and Creating the Virtuous Organization - a series of classes, ongoing qualitative research, and community conversations based on how companies can be good, not just do good. Eva and Owen Witesman have four children, who, she says, are “individually and collectively the central joy of my life.”